How a Chicken Helped a Pickup Truck

The journal Poultry Science tells us that if humans grew as fast as broiler chickens, “a 6.6 lb. newborn baby would weigh 660 lbs. after 2 months.”

Where are we going? To the chicken tax.

The 1948 finals of the Chicken of Tomorrow Contest attracted 31,680 eggs. In a Maryland hatchery, those eggs produced chickens that were raised identically for 12 weeks and 2 days. Whichever ate the least and grew the most would win.

You can see the trend. As the U.S. became the pacesetter for mass producing chickens, we flooded Europe’s chicken markets. And that is when the problems started. Facing U.S. competition, the EEC (European Economic Community) levied a whopping 13.5 cents/pound tariff on frozen chicken imports.

In 1963 we retaliated. Our target was Volkswagen. Having charmed the U.S. with their Beetle, their next step was a commercial vehicle. It never happened. The U.S. levied a 25% tariff that mostly affected light pick-up trucks.

On the supply side, foreign truck makers spent their time, energy and money on circumventing the 25% tariff. Hoping U.S. assembly could be defined as made in the U.S., they sent huge truck parts to the U.S. It did not work. They also said a truck was not a truck if it had (removable) rear seats. Those seats were declared illegal. 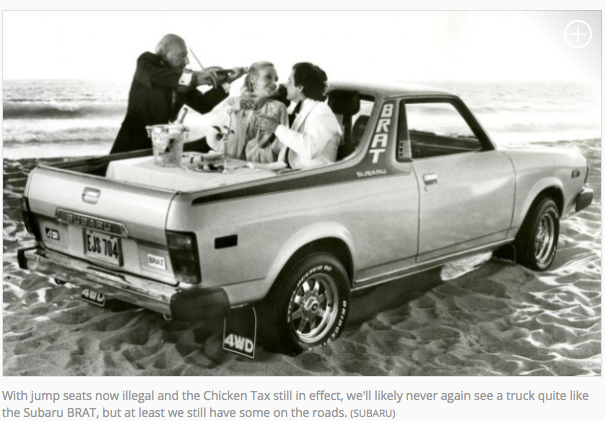 With little foreign competition, domestic truck makers could charge more and innovate less. And yes, still today with the tariff in place, we associate light trucks with Ford. Asked to name a truck, people even say the Ford F-150 is the most popular car in U.S. history.

Where are we? Germany had happy chicken farmers and we had happy light truck makers. But tariffs are always more complicated than the people they make happy.

My sources and more: Reminded of the chicken tax by NPR’s Planet Money, I followed two paths. First, you might enjoy (as did I) a Smithsonian article and one from the NY Post on chicken history. Those articles ideally complemented the saga of the chicken tax.