The Mystery of the Missing Productivity

This 1913 ad was for the Eleventh Edition:

Having paid nothing for using Wikipedia to read about the Eleventh Edition of Britannica (above), I would have provided the U.S. Department of Commerce with no indication that a person or people had produced the article and reproduced the image.

Where are we going? To free data that might skew productivity numbers.

Here is where it gets even more interesting.

It is possible that we are not measuring enough of what we do produce. After all, Wikipedia created a free article and reproduced the above ad. Decades ago, I would have accessed that information in a volume of Britannica that I had purchased. Now though, because much of the data that is produced, distributed and used has no price tag, it is not counted in official economic statistics.

Below you can see some data that might be excluded from any record of national output:

For the nonfarm business sector and for manufacturing, you can see (below) the recent slowdown in productivity increases. Even more distressing, for 2010 to now, the average increase has been .7 percent. 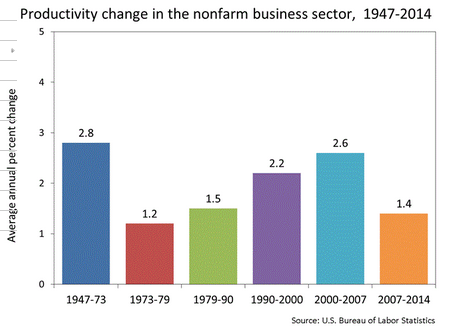 Focusing on labor, let’s measure productivity by dividing real national output by the number of hours labored to get real output per hour. It helps productivity to have our numerator grow as much as possible or our denominator decrease.

So, why the slowdown in the increase? That’s the mystery.

Economists have hypothesized that there might be less innovation or maybe we have the innovation but it’s spreading more slowly. Others have suggested the financial crisis led to less investment.

While all of the above is possible, I wonder if the biggest reason is understated output. And that returns us to the difference between Britannica and Wikipedia.

How to Find Your Match