How to Find Your Match

Assume you have two pairs of people who are incompatible as kidney donor/recipients.

Sue and Sam, and Dave and Donna are the original pairs. But what if Sue can help Donna? And Dave can help Sam? This is where we need an economist.

Where are we going? To matching markets.

If I have an apple and want an orange, it could be tough to find someone who would do the exchange. Instead though, money could eliminate the need for a double coincidence of wants. Increasing transaction activity and efficiency, we can just sell and buy our fruit.

Similarly, Sue and Sam lack that double coincidence of wants. However, money can’t help them because it is illegal to sell a kidney.

But there is a solution that Nobel prize winner Alvin Roth developed. Hoping to help more donors and recipients find each other, Roth figured out how to bring them together. The key was to create kidney exchanges that are based on multiple pairs. With two pairs, Sue gives a kidney to Donna and Dave gives his to Sam. Moving to three pair and four pair exchanges, the complexities multiply but so too do the number of beneficiaries.

Used by the National Resident Matching Program, below you can see how physicians and hospitals use the same pairing concept. 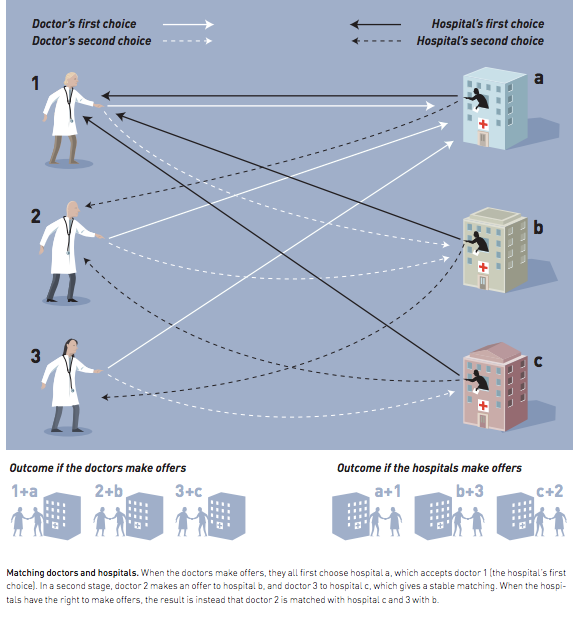 A market is a process that facilitates transactions among buyers and sellers. To work optimally, a market needs to be “thick,” to avoid congestion and to have simple and safe rules. “Thick” markets have many participants. Non-congested markets avoid the gridlock created by too many participants. For example, a congested market could have 1000 farmers each selling wheat. Because grouping the wheat into categories minimizes decision-making, you would diminish the congestion. And finally, as much as Adam Smith promoted laissez-faire markets with minimal government interference, we do need rules as simple as an opening and closing time.

Once Al Roth constructed matching algorithms through which non-money markets could be thick, non-congested, simple and safe, then kidney exchanges were only the beginning. Spreading to dormitory room pairing, physician residency programs, online dating and beyond, the concept reminds us that markets are everywhere.

The Mystery of the Missing Productivity