What the Big Mac Says About the Trans-Pacific Partnership

Opponents of the Trans-Pacific Partnership (TPP) free trade deal have cited currency and labor concerns. The currency part took me to the Big Mac while the labor issues are reminiscent of NAFTA. Let’s just look at the currency part today and save labor (and fashion) for tomorrow.

Where are we going?  To how weaker currencies affect our purchasing power.

The Price of a Big Mac

As of January 2015 an average Big Mac in the U.S. was $4.79. In Malaysia, $4.79 could buy you more than two Big Macs. Similarly, you can see below that for seven of the 10 TPP countries in the graph, the U.S. dollar has considerable purchasing power. 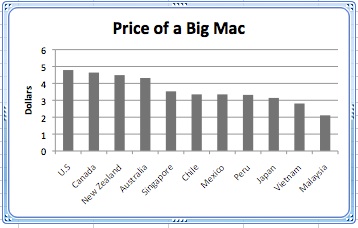 Where are we going? To how the U.S. can benefit from weaker currencies.

During the 1990s, Galesburg Illinois lost its Maytag refrigerator factory. Moving to Mexico, the factory departed with jobs on which Galesburg citizens depended. Feeling the impact of citywide unemployment, the local appliance store at first saw its bottom line suffer. Soon though cheaper imported high definition TVs arrived and offset the slump.

In the U.S., for consumption expenditures, free trade has a pro-poor bias. With low income households focusing purchases on tradable goods, they enjoy lower prices. Meanwhile, more affluent households allocate a higher proportion of their income to services that have little connection to international trade.

You can see the unequal gains in spending power from trade in these countries:

Thinking economically, we can see below a high domestic price for an item–maybe TVs. Then cheaper TVs enter the country and the supply curve becomes the (elastic) horizontal green line near the bottom of the graph. At that price, domestic producers are willing and able to produce a very small quantity. 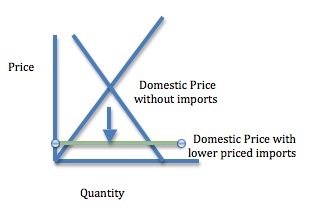 Who can send us those inexpensive imports? Most likely, the countries that sell a cheap Big Mac.

How Markets Can Save Honeybees

How the Trans-Pacific Partnership is About New Balance and Nike