How Feminists Should Feel About New Yorker Cartoons

Our story starts with an analysis of New Yorker cartoon content.

Where are we going? To expectations bias.

After statistically analyzing all of the New Yorker cartoons during 2014, writers for an online semi-satirical journal concluded that women are under- and stereotypically-represented. The bosses in New Yorker cartoons were mostly male as were judges, lawyers and scientists. But if you look for an assistant, a food server or a cave person, there was more of a chance that the individual would be female. Only as parents, spouses, and students did the number of depictions of women equal or outnumber the men.

Here are the actual results. The x-axis shows the “number of depictions” of females in blue and males in red. 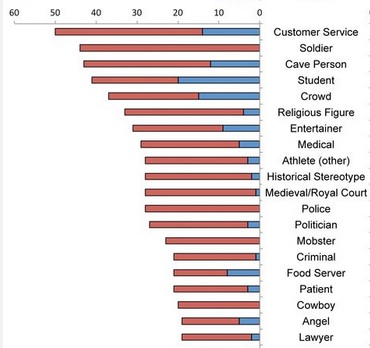 In cartoons and beyond, stereotypical depictions of women could be shaping our behavior by creating an expectations bias. Shown by the following experiment, what we expect can shape how we act.

During a 1960s lab experiment, Harvard professor Robert Rosenthal falsely labeled average rodents as either smart or dumb. Because his students seemed to have an affinity for the rats they assumed were smart, they handled them more frequently and more gently. Since touch affects a rat’s behavior, the “smart” ones not only outperformed the “dumb” ones but also were tamer, cleaner, more pleasant and more likable. Dr. Rosenthal concluded that his students had demonstrated an expectations bias that affected their subsequent behavior.

Similarly, could stereotypical depictions of women in non-authority positions, even in cartoons, create an expectations bias that influences an employer’s behavior?

When Real Peanut Butter Is Not What or Where You Expect

The Sounds That Can Sell a Product