A One is Enough Gender Gap Problem

It might be counterproductive to applaud a firm that hires a woman for a top management position.

A new study suggests one woman near the top does not lead to others. Actually diminishing by 51 percent the chance that other women will join the firm’s five highest executives, the one woman who makes it has broken through the class ceiling but not raised it. The origin of the study’s conclusions was a statistical anomaly. Comparing the specific numbers of women who were among firms’ top five to what 100 simulated examples indicate they would most likely be, data from 1500 firms revealed a big difference.

Not sure why, the study’s authors say that maybe it is “one and done.” The leadership feels the pressure to hire a woman, they do it, and then the executive suite door slams shut. They also suggest that male management could be resisting a female presence and lower ranking female executives leave because they do not expect a top promotion. Meanwhile, observing more women at the top with female CEOs, they discarded a “Queen Bee” scenario.

Looking at S&P 500 companies, Catalyst reports that only 23, a meager 4.6 percent of all CEOs, are women. Furthermore, lest we be impressed by that 25.1 percent number (below) for female senior level managers, we should keep in mind the possibility that their dispersion could confirm that “one is done.” 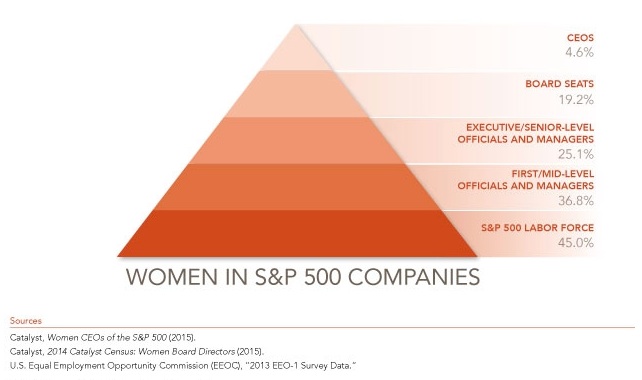 Whether reading the research or using plain old common sense, we know that we are diminishing our human capital potential when we constrain a woman’s participation in the work force. Or, like IMF chief Christine Lagarde, we can cite an “insidious conspiracy” against women that depresses a country’s economic growth by as much as 30 percent. (Lagarde was referring to a new IMF study that we will save for another day.)