What We Should Ask About the Wealth Gap

Like Supreme Court Justice Potter Stewart said about pornography, with wealth we can say, “I know it when I see it.”

However, it too is not so easy to quantify.

Where are we going? Let’s see what we really know when we discuss wealth inequality.

Defining wealth as the value of a family’s assets like a car, a house, jewelry and investments minus its debt, Pew Research based their conclusions about the wealth gap on the Fed’s Survey of Consumer Finances.

First they had to define upper and middle income: 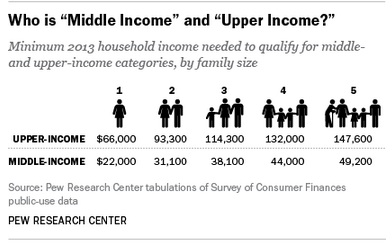 Then they could tell us that the wealth gap between the two was getting bigger: 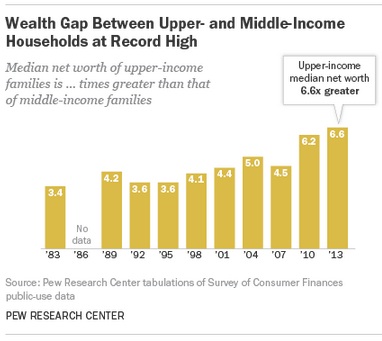 It all looks pretty clear cut.

Because it all depends on your yardstick, economists do not agree on the extent of the wealth gap.

Instead of the Survey of Consumer Finances (CSF), other studies are based on estate records and a third group focuses on tax data that relate to capital. The CSF depends on a survey that participants have volunteered for, the second looks at inheritance and the third, your returns from capital. Complicating the comparison even more so, the CSF only dates back to 1989, estates to 1916 and capital to the income tax which takes us to 1913.

Once though we touch the 1980s, the metrics diverge. The statistics that relate to capital indicate the most affluent are accumulating considerably more wealth. By contrast, our estates and survey of consumer finances lead to different conclusions.

Each data set has its own problems. And we have not even asked if income disparities rather than wealth might be a better metric for understanding inequality.

Whatever data we use, as economists, we should always remember incentives. And that takes us to an entirely different perspective.

In The Haves and the Have-Nots, economist Branko Milanovic suggests we use three questions to assess the impact of inequality.

So, even if we do know wealth when we see it, perhaps it is most important to look at its cause, impact and ethical implications.

The Unexpected Cost of An Almond