How Does a Helicopter Drop $4 Trillion?

The year was 1999 when Princeton Professor Ben Bernanke presented his “helicopter” solution for Japan’s economic problems. Faced with a sluggish economy that rockbottom interest rates would not stimulate, Japan instead could “flood” her population with money. A “helicopter” just had to drop the cash.

Eight years later, that helicopter flew over the U.S. economy. While Professor Bernanke recognized that, “…a helicopter drop of government bonds would not necessarily induce significant extra spending,” still, between 2007 (just with a trickle and no formal name) and 2014, Fed Chairs Ben Bernanke and Janet Yellen dropped more than $4 trillion.

Like Japan, in the United States, zirp—a zero interest rate policy (below)—was neither fueling economic growth nor diminishing very much unemployment. So, in 2008, the Federal Reserve decided to transform a trickle of securities purchases into a deluge. 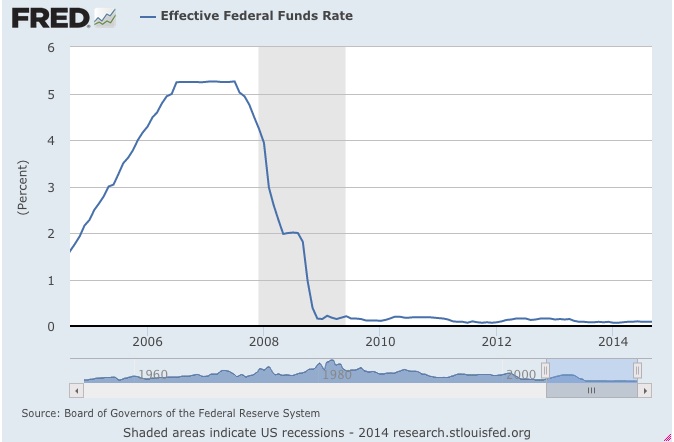 Very simply, the Fed tells banks that it wants their treasury bonds or their mortgage backed securities. A bank says “Yes,” and sells them to the Fed. With more “cash” sitting in its “reserves” (not really tangible  money—all bookkeeping entries) the bank has more of an incentive to let consumers and businesses borrow, especially because loans can generate more revenue than reserves or new securities.

Four Trillion Dollars Later,  What Were the Results?

Now that quantitative easing has ended, the results are being debated. Some say the helicopter drop fueled economic growth, diminished unemployment and super-charged stock markets. Others believe it is merely correlation and QE accomplished little.

And What Will Happen?

Will interest rates creep upward now? We just need to think about this bottle of suntan lotion.

“Imagine that the Federal Reserve wants to increase the price of suntan lotion. There are 10 bottles of Hawaiian Tropic for sale at the cabana. The Fed buys one per hour until it owns nine. Each time it acquires one, the price for the remaining bottles rises because people who don’t want to get sunburned are competing for the dwindling supply. Now that just one bottle is left, the Fed stops buying. Would you expect the price of the last bottle to fall suddenly? No—there’s still lots of demand and constricted supply. Same with bonds. The price of bonds should stay high—and yields stay low—as long as the Fed hangs onto its huge inventory.” (Bloomberg).

Our Bottom Line: The Fed’s Toolbox

As the source of monetary policy, the Federal Reserve has used three basic tools: the interest rate they charge banks, the size of reserves that banks are required to have on deposits, and buying and selling government securities. The fourth tool is quantitative easing.

Is Ebola Threatening the Price of Chocolate?

Our Weekly Roundup: From Misery to Chocolate