The Expensive Side of (Venezuela’s) Cheap Gas

In Venezuela, you could buy a gallon of gasoline or 12 packs of cigarettes. One half liter bottle of water would get you three tanks of gas. Per gallon, we are talking about less than five cents.

The problem, though, is that cheap gas is astoundingly expensive.

On the fiscal side, the subsidy costs the Venezuelan government close to $12 billion annually. And yes, we could say their oil is really cheap so they can afford it. But, think of the tradeoffs. With $12 billion more than three percent of their GDP, that $12 billion might have been allocated to health care or education. Meanwhile, more gas use internally could mean less export revenue.

The subsidy also has a distributional impact. Cheap gas benefits the wealthy households that use it more. Correspondingly, cities, with more drivers, wind up taking advantage of the subsidy more than rural areas. The main way that the poor benefit is through public transportation.

Finally, consider what it means to have the incentive to drive more. You create higher CO2 emissions and Venezuela’s are indeed tops in South America. You have more traffic, more noise, and more people who drive gas guzzling vehicles. Consequently, the lines at gas stations tend to be long and, with gas selling at $4.42/gallon in Colombia, you can see why smuggling is a problem.

So why do it? Sometimes we get used to our entitlements.

Below you can see that the subsidy increases supply, shifts the supply curve to the right, and moves equilibrium price down. 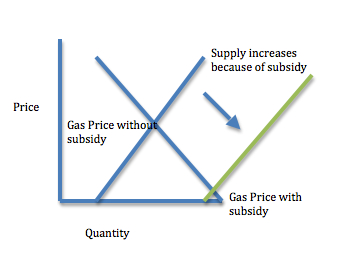 As we would expect, for gas prices, Venezuela is the outlier. Even in Saudi Arabia, another gas rich country, the average price of gas is 60 cents a gallon. With Norway at the other end of the scale, the spread in gas prices is more than $9.00 a gallon. On the low side, you have governments providing the subsidies that make it cheap. On the other end, taxes make it expensive. On both sides, we create incentives, tradeoffs and unintended consequences.

Below, you can see the differences are somewhat regional:

Whether looking within the U.S. or around the world, subsidies and taxes affect the price of gasoline and the tradeoffs that result.

How to Own the Word How