My Two Cents About Pennies

Several years ago, Starbucks infuriated its NYC customers when a price hike plus tax meant a tall coffee would be $2.01. The new price was not the problem. It was the penny.

Worth little, pennies are coins that we avoid carrying — and when we do carry them, we lose them. We even pay Coinstar 10.9 cents for every dollar of pennies we exchange in their machines and we do not think twice when we “Give a penny; take a penny” at store counters. I guess it makes sense that since 2000, close to one fifth of all pennies have disappeared.

The Cost of the Penny

For the country, though, pennies are expensive. Since they are 97.5% zinc, soaring zinc prices have pushed penny costs skyward. In 2013, totaling $114 million, penny production at the U.S. mint required 1.8 cents per penny. However, when the government sells the pennies they circulate, they can only charge — yes… a penny. So they are losing money. (However, we cannot make money by selling the zinc in pennies because meltdowns are illegal.) 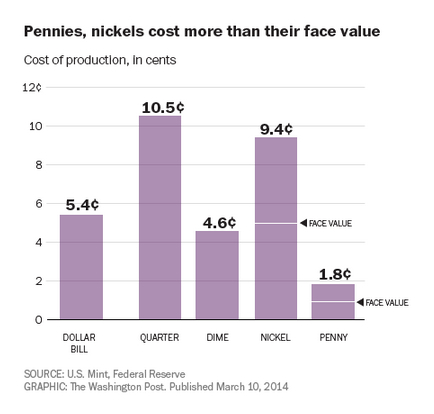 Because of their low status and high expense, why not have a penny phase-out? After all, Canada, New Zealand and Australia have stopped producing them. And, like for gasoline, if we did not have pennies, we could round up. (Find out more about rounding gas prices here.)

But, for some reason, the resistance is considerable. Perhaps the penny occupies a special place in our hearts. We say, “A penny for your thoughts,” and “Penny wise; pound foolish,” and “A penny saved is a penny earned.” Businesses that are set up to count coins would have logistical headaches and less demand. And, as you would expect, the resistance from the zinc lobby is huge.

In addition to different kinds of bank deposits, coin and currency compose a part of our money supply. To be considered money, a commodity has to be a unit of value (we know what it’s worth), a store of value (it retains spending power for a relatively long time) and a unit of exchange (people accept it as payment). Tobacco leaves, seashells and rectangles of paper have been called money.

Because of our dismissive attitude toward the penny, I wonder if it will eventually no longer be defined as money.

What Do iPhones and Pencils Have in Common?