Impact of the Russian Trade Embargo on Ikea's Swedish Meatballs

At the Moscow Zoo, the sea lions eat Norwegian shellfish, giraffes nibble on Polish apples, orangutans prefer Dutch bell peppers and the cranes consume Latvian herring. According to a zoo spokeswomen, “They don’t like Russian food.”
But the animals might have to become less picky. With the Russian embargo on U.S. and European food, substitutions like shellfish from Iceland will be pricey.

Around the world, businesses are feeling the impact of the Russian embargo. At a small cheese store in Moscow, while roquefort, camembert and brie sales have tripled, 30 miles outside of Paris, 100,000 pounds of brie that had been destined for Russia have no place to go. Similarly, bulk cheese purveyors in Germany and the Netherlands who sell edam expect to feel the hit from the embargo as do specialty cheese makers in France and Italy.
You can see who is affected by the embargo. 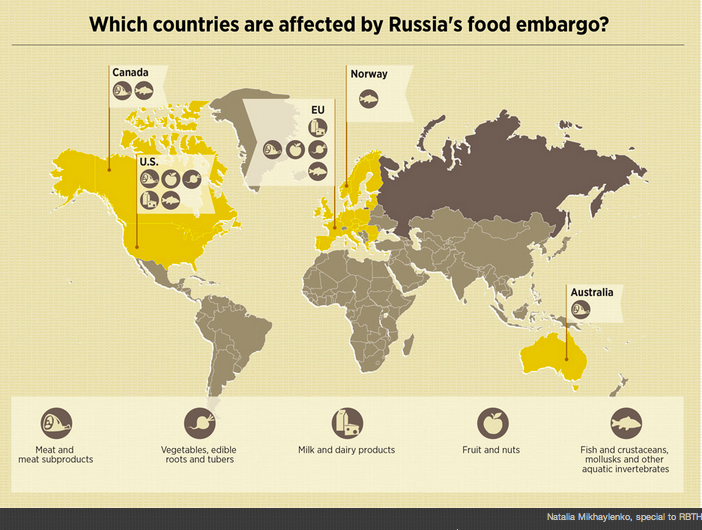 On the other hand, there are some smiles in Switzerland among makers of mozzarella, edam and gouda because of the surge in Russian demand. However, because the embargo could end in a year or less and changing supply chains takes time, they are worried about expanding their capacity.
Elsewhere also, the response has varied. At the buffets in their Russian stores, Ikea has said that it will stop selling Norwegian salmon and Scandinavian cheese but not Swedish meatballs because they do not come from Sweden. Meanwhile, Chile and China hope to replace some of Russia’s salmon supply and Brazil is welcoming Russian demand for its meat. Even fishing quotas have been affected with Scottish mackerel skippers asking to “bank” this year’s quotas so they can use them next year when the Russian market could return.
As for the United States, poultry and pistachios are at the top of the list. In 2013, the Russians were the second largest market for our poultry exports and are the seventh largest importer of our pistachios.

The Bottom Line: Supply and Demand

Hypothetical supply and demand curves perfectly illustrate the impact of the Russian embargo.
Here, we have an increase in demand for cheese from Switzerland because of the embargo. Note though that the supply curve is somewhat vertical because the quantity supplied is inelastic. As a result, quantity barely changes but price rises. 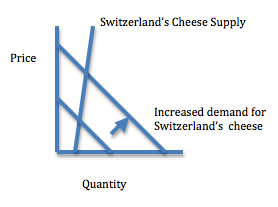 Supply and demand can also display a spike in chicken thigh prices. 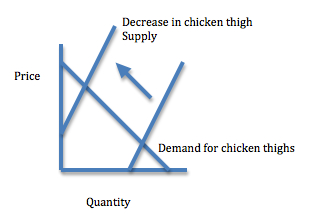 Our bottom line: Everywhere, the impact of an embargo is classic supply and demand.

When is a Tax Credit Like a Groupon Coupon?

Weekly Roundup: From Waist Size Checks to the Russian Embargo