Hearing tax incentives and “sensible” regulation, will Sriracha move from Irwindale, California to Texas?
Last year, Irwindale residents complained that the local Sriracha processing plant was a “public nuisance.” Hearing that their teary eyes, sore throats, heartburn, asthma and nosebleeds were related to a pungent jalapeño odor, a judge agreed. As a result, he said that the facility will have to partially close. Sriracha responded that they installed extra filtration but that does not appear to have been sufficient.
Still though, because of the local peppers, Sriracha might try to comply fully with the court’s decision. At the nearby Kern County Farm, they specifically breed Sriracha’s peppers for ‘“heat, color and taste.” And the location of the farm lets them harvest, deliver and grind in just one day.
Trying to lure businesses like Sriracha, representatives from Texas that included Governor Rick Perry, have toured California. Their sales pitch, touting lower taxes, “sensible” regulations and a “fair” legal system, worked with Toyota. Currently located in Torrance, California, they will be moving their North American sales headquarters and 2000 jobs to suburban Dallas. 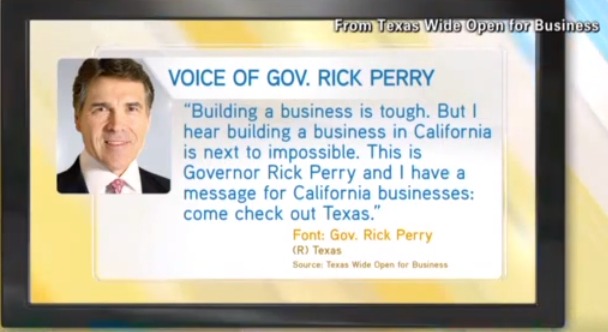 You can see why Sriracha execs have said they would like to remain in Irwindale but will consider the alternatives. The tax incentives might be an offer they cannot refuse.
Sources and resources: Econlife looked at Sriracha’s difficulties in Irwindale while the LA Times had a recent update. For the Toyota move and others that made a similar decision, Bloomberg had a pretty detailed story.