After technological innovation multiplies, might the pace of discovery slow down?
Think of the history of antibiotics. Starting with the Sulfa drugs that were first discovered during the 1930s, the new antibiotic timeline is congested until 1962. Yes, recently, new antibiotics classes were introduced. Since 1967, though, there have been no new antibiotic discoveries registered with the FDA.
And therein lies our “discovery void”:


Similarly, George Mason economist Tyler Cowen describes what he calls “The Great Stagnation”:
“If we compare, say, a 40 year period–1917-1957–people are getting electricity, flush-toilets, automobiles; very rapid increases in the standard of living. If we look at the same data or the anecdotes, post-1973, there is a slowdown in growth of living standards for the average person or the average family.”
Correspondingly, we have Samuel Arbesman claiming we suffer from innovative “exponential decay.” In a brief paper on “Quantifying the Ease of Scientific Discovery,”  he observes that for new classes of mammals, chemical elements and minor planets, as more was discovered, the ease of subsequent innovation increased. With mammals and planets, the search required find ever smaller examples. For the human body, in 1880, the parathyroid, was the last major organ to be found.
So, where does this take us?
1. To a Slowdown? According to Tyler Cowen, we might have reached a knowledge plateau. Because the low hanging fruit has been picked, it is ever more difficult to make the scientific breakthroughs that spearhead growth.
2. To Teams? With discoveries becoming more complex, the renaissance man—like Thomas Edison or Albert Einstein—no longer can knows it all. Instead, scientists need to pool their expertise.
3. To a Future Acceleration? Citing “technological singularity,” economist Robin Hanson reminds us that technological innovation might indeed occur in spurts. In past millennia, we see long periods of stable growth rates and then a technological breakthrough that produces a world transforming change. One of his examples was a farming revolution 10,000 years ago and then, maybe 9800 years later, the Industrial Revolution.
Our bottom line? Through production possibilities frontiers, we can illustrate economic growth. With the frontier displaying the most that existing land, labor and capital can produce, the goal is to shift the curve to the right. By improving human capital, antibiotics were a technological innovation that shifted the frontier outward.
A Production Possibility Frontier: 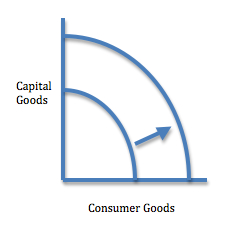 If we are due for a breakthrough, which class of innovation do you think will pop our current PP curve to the right? We would enjoy hearing your opinion.
Sources and Resources: Always excellent, The Conversable Economist was my starting point with Dr. Taylor’s reference to antibiotics. That took me to Tyler Cowen and Robin Hanson econtalks that I enjoyed several years ago, to Samuel Arbesman who always has something interesting to say and to the original antibiotics article (and innovation timeline).

An Unexpected Cost of Climate Change?