During the 1970s we did not eat many limes, maybe less than 1/2 a pound each year, and most were from Florida. Now our consumption has tripled and the lime has gone global.

Faced with cheap Mexican limes, devastation from Hurricane Andrew in 1992 and a more recent attack of canker disease, Florida let Mexico take more than 90% of the US lime market with California in second place. Now, because of problems in Mexico, lime prices are up. Some unusually wet weather, some price fixing, regional unrest and a bacterial disease that seems to be spreading have shifted the lime supply curve to the left. Combine that with increased demand and you get a big price increase. 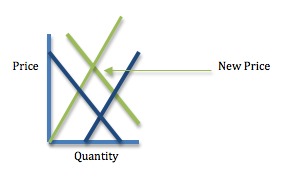 Consequently, bar owners say they are getting squeezed by a fourfold increase in lime prices– from $18 for a 35 pound box in December to $85, now.

The lime story reminded me of a quote from one of the first television police dramas. Called “The Naked City,” the program concluded each episode with, ” “There are eight million stories in the naked city; this has been one of them.”

So too with rising commodity prices. While lime is a Mexican story, we could look at sugar or cereals or oils and hear a different tale. For cereal prices, the story takes us to Ukrainian geopolitics while bad weather in Indonesia and Malaysia affected the palm fruit which meant less palm oil and higher costs for Nutella makers.

Whatever the reason, though, it still returns us to demand and supply. First demand might shift rightward and or supply to the left. Then though, if we wait long enough, the lure of higher prices will eventually send supply up and price down once again.

Sources and Resources: H/T to marketplace.org, always a good site for an interesting twist on a story, to Quartz for their food graph and story and also to the NY Times and Bloomberg for more on lime prices.

The Unexpected Impact of the First Bar Code