Wall Street was where our first Congress met, where Alexander Hamilton lived (several blocks from Aaron Burr’s home), and where the new nation’s financiers congregated. Gathering at coffeehouses or under the buttonwood tree in front of 68-70 Wall Street, these gentlemen traded bonds issued by the new government and an assortment of other commodities.

As their trades multiplied, a more formal auction evolved in which buyers no longer needed to identify the sellers. They just needed the people in the middle who could match them. Specializing in certain securities, the middle men (and yes, they were men) bought, sold and priced the stock for specific companies.

Called specialists, the 19th and 20th century descendants of the men who traded under the buttonwood tree, were supposed to “make” orderly markets in which prices eased up and down. If there were insufficient buyers, then the specialists would take their place. And no, they were not doing every one a favor when they maintained orderly markets. they too expected to make a profit.

I can recall visiting the NYSE not so long ago when we could see “trading posts” on the floor where the specialists (now called market makers) were based. Go to one post and you could buy IBM, another might trade General Motors, and a third Johnson and Johnson or GE. Today, those trading posts are still there but they are no longer the vortex of NYSE trading. Computerized trading means we really do not need people to match buyers and sellers in stock markets. Nor perhaps do we even need market makers who determine appropriate prices.

And that returns us to Goldman Sachs. They had purchased Spear, Leeds & Kellogg for $6.5 billion because they were market makers and executed trades. Now, though, as technology has pretty much replaced what they do, the value of Spear, Leeds has plunged to $30 million and maybe less.

Our bottom line? We need financial markets so that firms can raise money, individuals can invest savings, governments can borrow…the list could be endless. Whether human or computerized, dependability, integrity and liquidity have been essential.

One of many that were on the floor of the New York Stock Exchange before “electronics” arrived, this is trading post #12 where Applied Digital Data, Union Camp, and the Sweets Co. Of America traded. 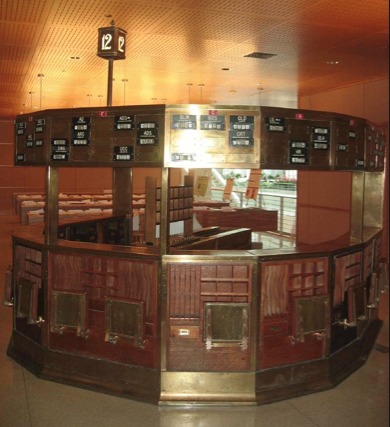 A detail that shows the share prices more clearly: 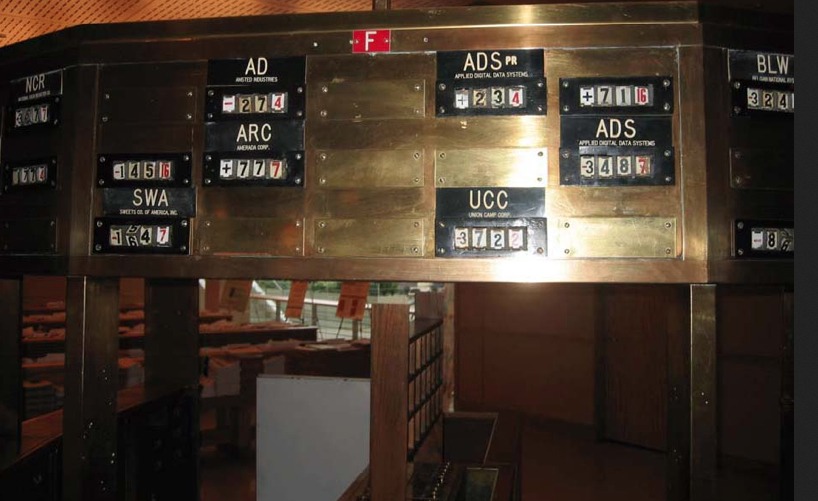 Sources and Resources: Providing some history, the NY Times just reported that Goldman wants to sell Spear, Leeds & Kellogg but for more detail and the source of an excerpted paragraph above, my book, Econ 101 1/2 tells the whole story. It was tough to find a good historic picture of the NYSE so I finally used a trading post that was given to the University of Chicago.