Why Would the Nigerian GDP Double Overnight?

We might have to say BRINC rather than BRICS.

As a developing nation with the highest GDP in Africa, South Africa has been the “S” in BRICS (Brazil, Russia, India, China). Now though, Nigeria has raced ahead. During one weekend in April, the market value for all goods and services Nigeria produces jumped by 89% to $510 billion.

The reason is not because spending in a GDP component–government, gross investment, consumer goods and services, and net exports–is surging. Instead, Nigerian statisticians decided it was time to update what they included. Called “rebasing,” they added industries that, when they last revised their GDP in 1990, had not even existed.

In “Measuring Better,” the Nigerian Bureau of Statistics presented their rebasing “roadmap:”

“Rebalancing” might better describe how the GDP was transformed. Invisible before, now $600 million from Nollywood films and the spending of 120 million mobile phone subscribers became a part of GDP totals. Whereas before, oil and gas occupied 32% of production, now the sector shrunk to 14%. Suddenly, with a meaningful consumer sector, the Nigerian economy looked more diversified. 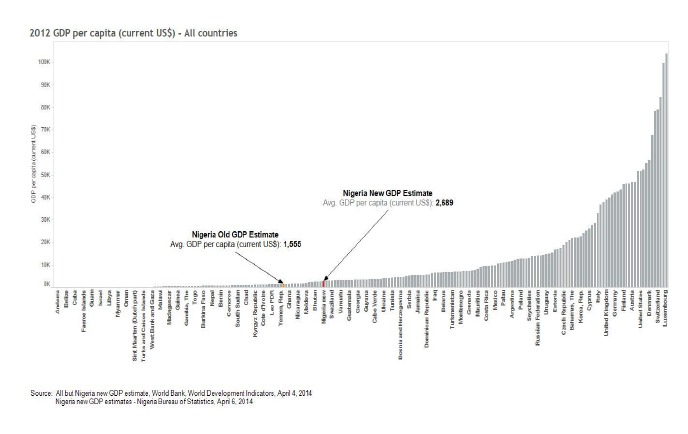 Blogs talking about rebased GDPs have suggested that Nigeria’s new numbers better reflect what they really produce. After all, we just did the same thing in the US when we added R & D, music production and other intangibles to our gross investment GDP component and then increased past GDPs because of the change.

Our bottom line? For Nigeria, moving toward greater accuracy and a new position in world GDP tables, rebasing appears to be a big step. For us, though, we should keep in mind economist Morton Jerven and his book, Poor Numbers. Looking at statistics, he suggests a dose of skepticism. Just because we have a precise number does not mean that it is accurate, especially for African development.

Sources and Resources: To understand the meaning of Nigeria’s GDP rebasing, I suggest moving between the media analyses here and here and their own report and then looking at our econlife post on Poor Numbers.

The Big Impact of a Little Salamander

Should Detroit Sell Its Art?