The Cost of Traffic in Fort Lee

Have you ever thought of traffic congestion as a queue?

Concerned about congestion on Oscar night, engineers in LA have manipulated traffic to keep the limo queues moving. Before Crash won the Oscar in 2006, street-based observers were calling in with, “…can you favor Wilcox at Hollywood?” or “Man, did you happen to copy Highland and Sunset? There’s quite a queue going northbound,” or “The limos are starting to back up, almost at Santa Monica.” Responding from a City Hall basement, an official might lengthen a red/green cycle time or cancel a left turn signal.

On highways, we could say that we have “moving queues.” Sometimes fast or slow, the flow is called a “platoon” of vehicles. When a car in front of you switches to another lane, your position in the queue changes. For a moment, it feels good that you have moved up.

As economists, we can say that traffic queues are costly. Estimated by the Texas Transportation Institute (2009), congestion could cost a normal driver the equivalent of $15 an hour based on what she sacrifices and what she consumes in time, fuel, even mental energy and whatever else she might have been doing. For a truck driver, they say the hourly costs could be $100.

Think of what happened in Fort Lee, NJ when an aide to Governor Chris Christie mandated rush hour lane closures for 4 days on the approach to the George Washington Bridge, a major artery connecting NJ and NY. He said the reason was a traffic study.

The results were a political storm and costly traffic queues. Extra wait time was reported at 2800 hours during the busiest commuting hours for Fort Lee related traffic. Time saved on I-95 in the lanes that opened up because of the lane shifts was 966 hours–maybe an average of 5 minutes per driver.

As for the ripple to local streets, news articles used the words gridlock, paralysis and standstill traffic. Here the cost depended on the vehicle. School buses and ambulances were interminably delayed as were commuters and people going to Starbucks.

I like to think that the “glasses” you wear determine what you see. For the GW Bridge lane closures that hit Fort Lee, economic lenses revealed the cost of traffic.

Sources and Resources: I always enjoy returning to Traffic by Tom Vanderbilt, the source of my LA quotes and  queueing ideas and to Timothy Taylor’s lectures at the Great Courses. For traffic data, I listened to Lecture 4 in his “Unexpected Economics” series. Among the countless articles on “Bridgegate,” USAToday and northjersey.com balance the politics with facts about traffic. 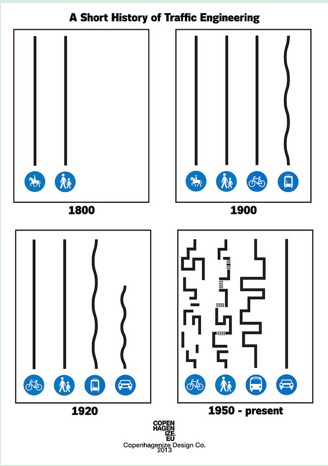 How do you interpret the changing lines?

Are You Buying Less Soup?

Happy Birthday to a Great Father (of our economy)