I wonder if we could say that Mayor de Blasio’s sick leave proposal dates back to 1895.

119 years ago, concerned with the harm that a “biscuit, bread, cake bakery or confectionery establishment” could inflict on its employees, New York State passed the Bakeshop Act. 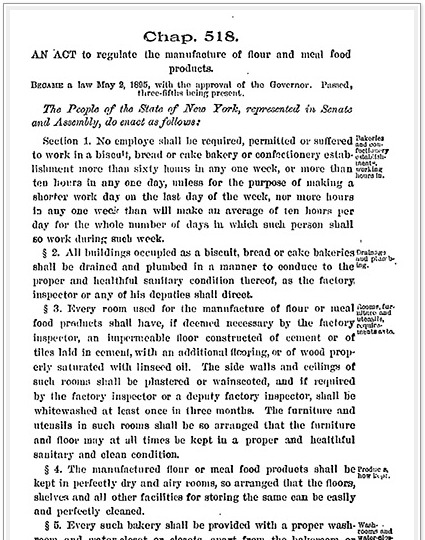 In 1902, a Utica, NY baker, Joseph Lochner, was fined $50 for an employee workweek that exceeded the 60-hour state-mandated maximum in the Bakeshop Act. On appeal, his conviction made it to the US Supreme Court. In Lochner v. New York (1905), the Bakeshop Act was declared constitutional and Lochner’s longer workweek became legal. In 1937, the “Lochner Era” ended when the Supreme Court reversed the decision.

In NYC, the City Council will be voting on a bill that mandates up to 5 paid sick days for full-time employees in all NYC businesses with 5 or more employees. While NYC already has a sick pay law, the new one is much more extensive. It includes manufacturing establishments,  sick day care for siblings, grandparents, parents and children, and applies to smaller businesses.

The debate is timeless. For more than 120 years, we have been trying to identify the most productive balance between the freedom that the market system requires and government regulation of workers’ rights.

Sources and Resources: Yesterday, one of my morning walk podcasts coincided with the day’s news. I listened to Planet Money discussing the history of labor regulation and then, at home, there were the NY Times and WSJ headlines on the de Blasio sick leave proposal. I also went to this website for the Court’s opinion on the Lochner case and here for the Bakeshop Act.

Does Your Barista Do a Repeatable Routine?

The Revolution That Grandma Started