When Bird Tourism Is Not “For the Birds”

New Zealand just decided that the kākāpō could no longer be its “bird of the year.”

About more than a bird, the decision is also economic.

As the world’s fattest parrot, the kākāpō can’t even fly. But because it is rather cute, it won New Zealnd’s coveted (I assume) bird award twice. So this year, it was eliminated from the competition.

However, there is a long list of alternatives. Starting this week, we could vote for the kererū. Tipsy after eating fermented berries, it tends to fall from trees. Another possibility is the hākoakoa. A bird with a distinctive personality, it is known for eating others’ chicks and harassing birds while in flight to get their regurgitated food. A nicer bird with chicks that look like “itty-bitty, black fluffballs,” the takahē was called a “juice extractor on legs.” Meanwhile, we can add rockhopper penguins with crazy hairdos, the tākapu that has nostrils in its mouth, and the Kōtuku ngutupapa that can scoop up crabs with its spatula shaped beak.

As economists, we can say that all of this matters because of the bird tourism that researchers recently described. The birders that go to Alaska tend to be retirees that stay longer than other visitors and are more active. The data indicate that bird tourism generates considerable revenue. Just in Alaska’s Rain Forest region, birders spent $182.4 million during 2016. Their spending included tours, lodging, clothing, and food: 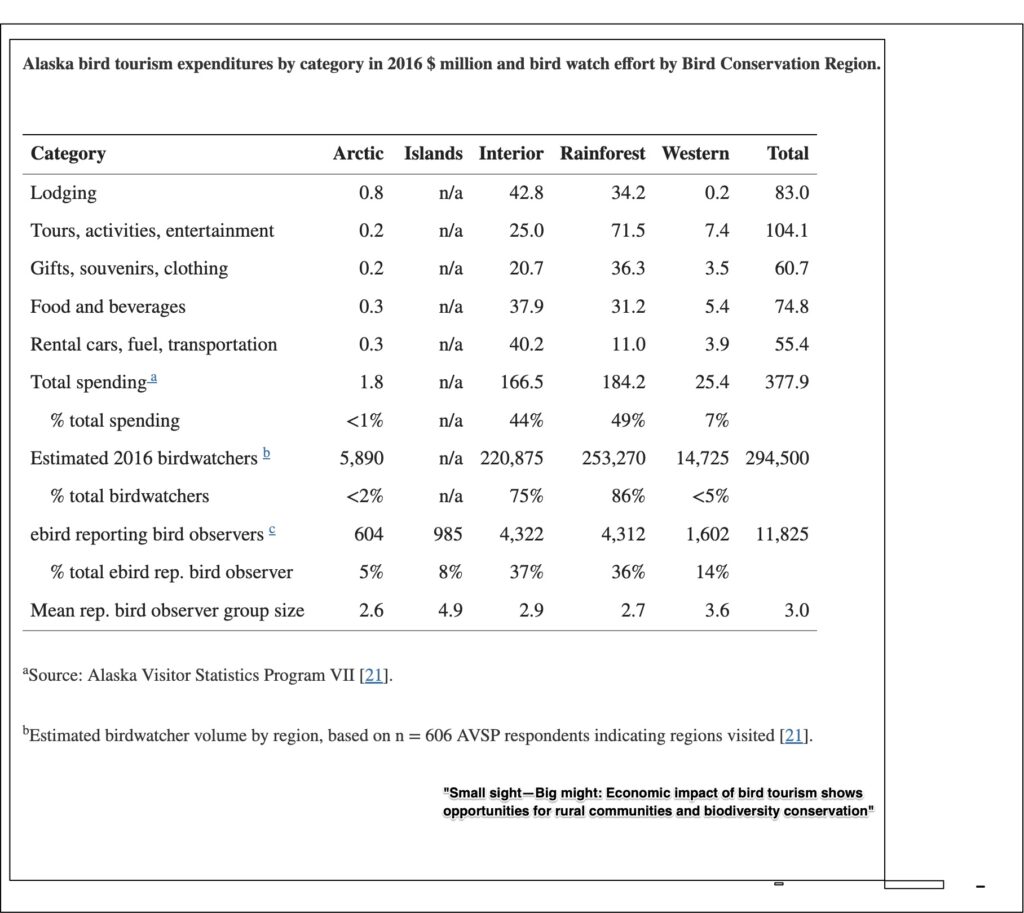 The revenue from bird tourism can give a fiscal boost to any country when it totals many millions of dollars. In addition,we can return to knowing that we “treasure what we measure.” By recognizing birds, we boost their value and our biodiversity. And finally, the Alaska data indicate that the industry supports approximately 4,000 jobs.

So, we get a fiscal, environmental and employment recipe. Certainly, a popular contest can be one ingredient.

sources and more: Thanks to my daily BBC podcast for alerting me to New Zealand’s kākāpō decision. From there, my husband sent me this wonderful Washington Post article that said it all. But then, I needed the academic perspective for my bird tourism economic facts. Our featured image is a picture of the kākāpō.

How Much Less We Work