The Tooth Fairy’s budget is way up.

Where are we going? To the cost of raising a child.

Also though, it depended on where you live. While the tooth fairy asked for $1.46 less in the West (why???), every other region’s average price increased. In my home state, NJ, she left close to $7.00!

Somewhat comparably, babysitters have discovered they can ask for more. According to one childcare marketplace, the typical babysitter that charged an average of $14.72 an hour in 2020, now asks for a whopping $18.05. So yes, the tight labor market is teaching teens a lot about demand and supply. They realize that a shortage of babysitters means $30 an hour is even a possibility.

For a child that would be seven this year, this USDA graph gives you an idea of the spending: 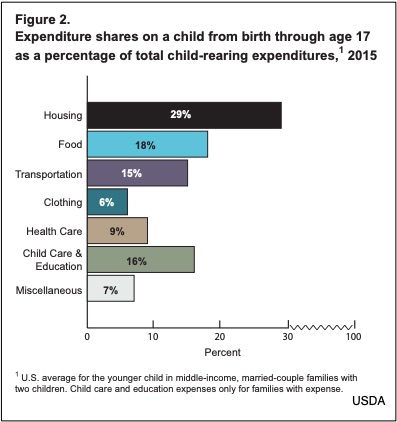 Our Bottom Line: Economies of Scale

We can conclude by saying that sometimes more is less. Or, as economists, we could say that we achieve economies of scale when our kids share a bedroom, pass down clothing and consume cases from Costco.

I guess if you spend $30 on a babysitter, it’s better having more kids.

My sources and more: While my tooth fairy totals from Delta Dental were up-to-date, I suggest looking at the USDA child cost materials even though they are not. Then, for what really says the cost of a child, do look here at the stress kids create. Please note also that our featured image is from the WSJ babysitting article.and parts of “Our Bottom Line” were in a previous econlife post.

What Grubhub's "Free Lunch" Cost Us