A new survey from the Federal Reserve gives us some clues about inflation.  Called SHED, the Survey of Household Economics and Decisionmaking looks at our financial well-being. Since the first year of the survey in 2013, households never felt better than during 2021.

Published yesterday, with data from October and early November, the Federal Reserve Report focused on four big categories. For every one, the response was positive. More adults reported doing better financially, being able to manage unexpected expenses and to pay their bills. At the same time, graphs showing how many of us are doing worse financially showed a precipitous dip in the numbers.

Other topics in the 98-page report related to the bank accounts that most adults had. They looked at housing through the continued increase in refinancing because of low rates. Meanwhile fewer borrowers were behind on their student loans and non-retirees felt okay about their savings for the future.

In addition, the new topics in the survey included “emerging products, cryptocurrencies, and Buy-Now-Pay-Later.” As an example of why we BNPL, this graphic was one of many that provided insight about subsequent inflation: 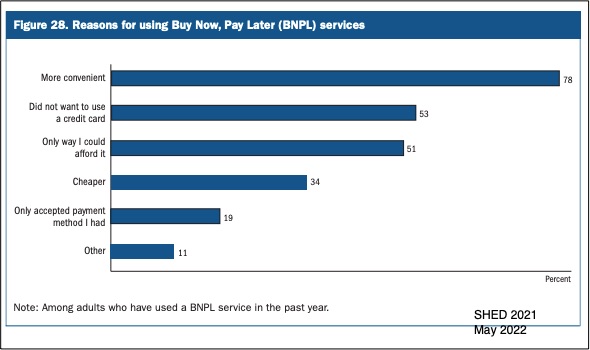 During an interview on MSNBC University of Michigan economics Professor Betsey Stevenson suggested that elevated financial well-being created the incentive to buy more. And that led to our current inflation problem.

We wanted more cars but there were shortages because manufacturers did not have the computer chips. As a result, used car prices were up a whopping 40 percent. Meanwhile, stuck at home during lockdowns, we switched demand to goods from services. Instead of hotels, planes, and restaurants, we wanted furniture, bread makers, and residential quality toilet paper. However, supply chain snarls and port pile-ups limited the goods that could arrive at our doorsteps.

From here, we can add the Russian invasion. Increasing oil prices, it substantially added to inflation. According to the CPI, fuel oil was up a gargantuan 80.5 percent and gasoline, 43.6 percent during the past 12 months.

Telling us why we had the incentive to spend more on fewer goods, perhaps though this graph says it all: 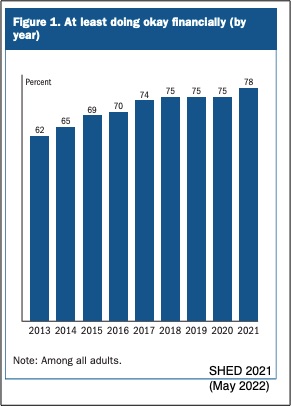 My sources and more: During yesterday’s 10:00 MSNBC news report, economist Betsey Stevenson explained the connection between SHED and inflation clues. This was the Fed report to which she referred.