A Day in a Ukraine Factory

In a South Ukraine city, a business continues to function.

But nothing is normal.

The place is a grain mill in Mykolaiv. They make flour, pasta, and cookies.

At 9:00 in the morning, they check on everyone’s safety and decide whether to open. The work window is 10-2:00 when the risk of bombing diminishes. At 2:00 almost everyone leaves.

In the factory, the machines keep going when the sirens send employees to the bunkers. They just have to be sure the silos that catch the flour are empty. Then, returning, they quickly remove the freshly milled flour in case they have to head for a shelter again.

At first they said it was scary. But now, used to the sirens, they shelter, check with friends on cell phones to see who was hit, and then when all is clear, head back to the machines.

Although their work force is smaller, they’ve hiked productivity. Sixty percent of their output goes to the military and the rest to the local population. Part is given away to neighborhood groups that feed refugees.

The factory owner reports that he has doubled wages and is paying 40 percent more for ingredients. As for transport, costs have tripled and drivers are frightened.

Although the business is not making money, the owner says they will remain. Rather than fight in the army, they were told by the government to continue production. An estimated 300,000 people now live in Mykolaiv.

You can see that Mykolaiv is located in the middle of Ukraine’s wheat heartland: 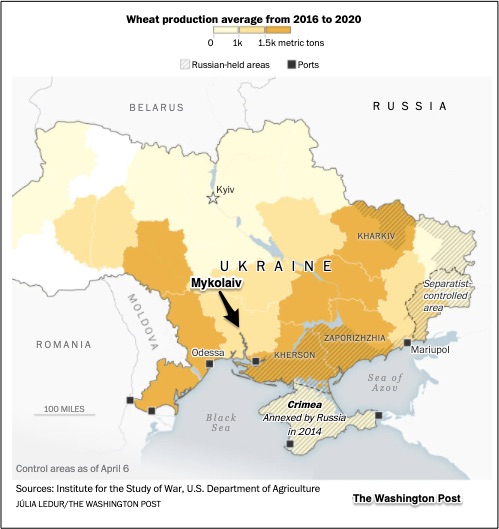 Having exported approximately eight percent of the world’s wheat in 2021, Ukraine harvested a record crop that mostly fed the Middle East, Pakistan, and Chinese livestock. This year again the problem is not supply. The problem now is the Black Sea ports that Russia has blockaded. Responding, Ukraine is trying to shift to rail transport. At the same time, other producers like Argentina have upped supply.

My sources and more: Thanks to The Journal for the look at a Ukraine business that I listened to during yesterday’s walk. Then The Washington Post, the USDA, and Illinois’s farmdocdaily had the bigger picture.

A Global Look at Spending and Taxes