The Death of the Pizza Principle

Rather like an economic law, the Pizza Principle has been a truth in New York City for decades.

Now though, maybe not.

Since the 1960s, the average price of a plain slice of pizza (originally close to 15 cents) has been almost the same as a subway fare. During 2014, an adjunct statistics professor at Columbia University used a massive data base to confirm that when pizza became more expensive, so too was the subway.

Now though pizza prices are doing a meltdown while subway fares have been been frozen. A plain slice could cost you $3 or more while the subway is still $2.75.

Moving up from less than a dollar, together, pizza and the subway became more expensive: 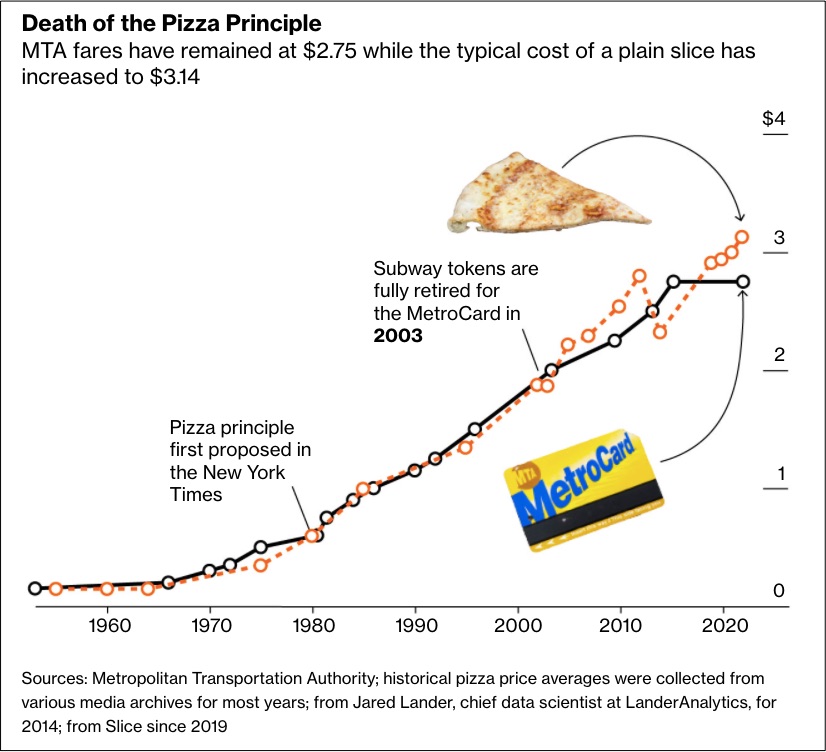 For reasons that relate to COVID-19, mass transit is down and pizza prices are up.

Hoping to encourage ridership, NY state’s Governor Hochul proclaimed a subway fair freeze. Mass transit needs the revenue and the riders that left because of COVID-19 need the nudge to return. The fare freeze was supposed to achieve both goals. Then, once the freeze is lifted, the dollars should return with the traffic.

Meanwhile, we could also say that the pandemic helped to push pizza prices upward. Because of the pandemic we had factory shutdowns and supply shortages (even pepperoni). They pushed up the prices of tomatoes, cheese, and wheat. Now, just as our pandemic recovery began, weather problems and the Ukraine invasion have further diminished the wheat that pizza makers need for their flour. Furthermore, wages have climbed and delivery apps take a slice of the profits.

Looking at pizza prices and subway fares, a behavioral economist might take us to a reference point. Reference points come in handy as a judgment tool. When the price of a gallon of gasoline rises from $4.00 to $4.25, we think $4.25 is expensive because $4.00 is our reference point. However, our outlook changes when the price sinks from $4.50 to $4.25. Then the new price seems less objectionable because of a new reference point. Somewhat similarly, at work we will be unhappy with a 5% raise when an associate gets 7%. If our stock portfolio plunges, we don’t feel so bad if the S&P declined even more.

We could say that pizza and the subway each have been the other’s reference point.

My sources and more: I was fortunate to have heard about the Pizza Principle on Bloomberg radio. Then, I discovered a slew of articles, here and here, with the details on the Principle and making pizza.

Our Weekly Economic News Roundup: From the Global Big Mac to Local Neon

Why We Don't Want To Be The World's Happiest Country