A Tale of Two T’s: AriZona and the Model T

Containing 23 ounces, there is a lot of tea in the AriZona can. And yet, at 99 cents, the price of AriZona tea has remained the same for 30 years.

It reminds me of the Model T.

AriZona tea is privately owned by a billionaire. When a co-founder wanted to sell the company to a large multinational, Don Vultaggio bought his partner’s share for close to $1 billion. Since then, unconstrained by shareholders and his former co-owner, Mr. Vultaggio has maintained the price. A perfect and inexpensive marketing tool, the 99 cents on the can really says I am cheap to his supermarket, gas station, and convenience store fans. The result appears to be the volume that low margins require.

There are two ways we can look at 1992 prices. We can check where an inflationary increase would have taken the price today. Not accounting for all rising land, labor, and capital costs, the BLS Inflation Calculator tells us it should be $2.06. 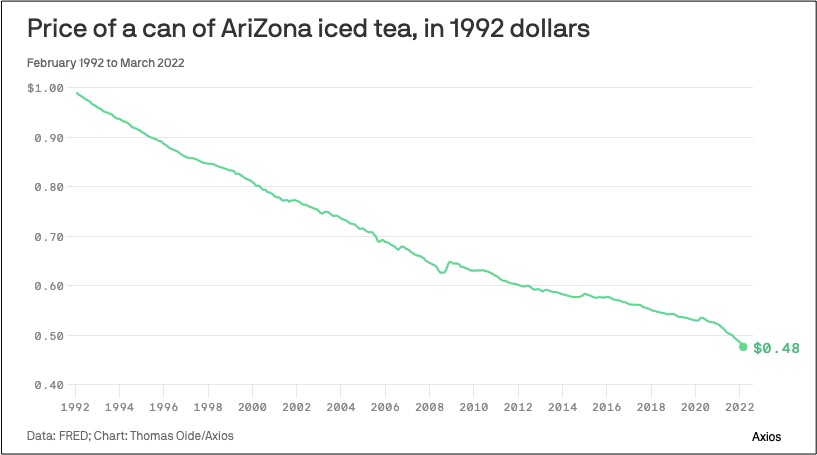 The Arizona formula is high quality and large quantity for a low price. Henry Ford had the same equation for his Model T.

When Henry Ford experimented with conveyor belts that streamed parts to the worker, the results were stupendous. Because chassis production time dropped from 12 hours to 2.3, output soared and per car cost plunged. By the mid-1920s, the lowest priced Model-T was $260. Suddenly affordable, the car attracted millions of buyers:

Somewhat similarly, by diminishing the amount of aluminum and having suppliers compete on price, AriZona did some can cost cutting. The company also has tweaked its operations and makes middle-of-the-night deliveries to save on transport. Perhaps most like Ford, they’ve achieved scale through their low price and high quality.

So where are we? We can ask if all inflationary price hikes are necessary.

My sources and more: My Axios newsletter introduced me to the AriZona price anomaly. From there, Medium took the story to new details as did the LA Times. And finally As for the Model T, I went back to a past econlife post. Please note that our featured imaged is from Myung J. Chun at the LA Times.

All You Could Want To Know About Chocolate