Deciding Who Is Rich

But the answers vary.

Deciding Who Is Rich

Many of us agree that advantages and obstacles play a major role in determining who is rich and who is poor. In a Pew survey taken by 12,638 U.S.adults, a majority responded that people became rich because they had more advantages. Correspondingly, 71 percent said life’s obstacles were a reason for being poor. As for working hard, just one-third of the people in their survey believed the work ethic was the reason for affluence.

As you might expect though, a deeper dive into the numbers reveals our political differences. Democrats and Democratic leaning independents were more likely to connect advantages with being rich and obstacles with poverty. Meanwhile, a majority of Republicans and Republican leaning independents cited hard work: 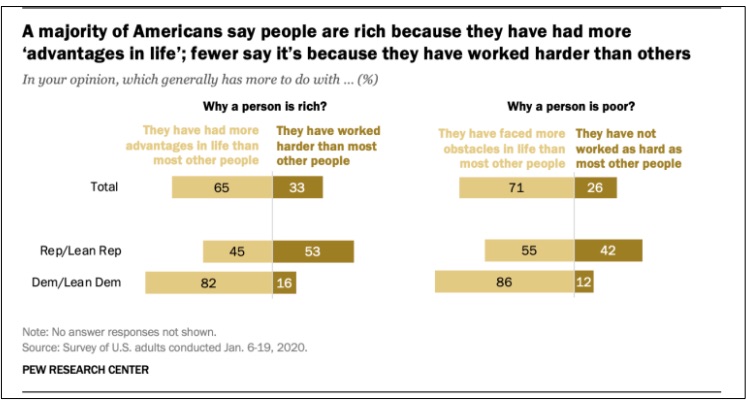 We can also use IRS tax data to identify the rich.

Implying that $400,000 makes you “rich,” President Biden is proposing that individuals with an annual income that exceeds $400,000 and couples at $450,000, should have a bigger tax bite while middle and lower earners would pay the same or less. We should note that the $400,000 threshold takes us to the top 1 or 2 percent but the precise data is somewhat “fuzzy” because the IRS has the numbers for that $500,000 threshold.

At the same time, a large proportion of our population owes zero income tax. In 2018, 53 million taxpayers had no income tax liability because of deductions and credits:

Returning to where we began, let’s conclude with a quote about the rich from a financial psychologist:

“Rich is just the term we use to describe people who have more than us when we don’t think they deserve it…The definition of rich is entirely subjective…$400,000 is just an arbitrary number–it might make you ‘rich’ in Middle America but middle class on the coasts.”

So maybe we should not call the rich, rich?

My sources and more: One of my favorite podcasts, Slate Money had the perfect debate about deciding who is rich. From there, I wound up at Pew Research and then the CBO. Next, curious about revenue, I found much more in this excellent discussion from CNBC and also from the Tax Foundation. Perhaps though the best column I read had a financial psychologist defining rich (which I quote above).

Please note that our featured image is from Brookings.

Why Traffic Jams Could Spread Less