Although their packages are similar, the “skittles” inside are rather different: 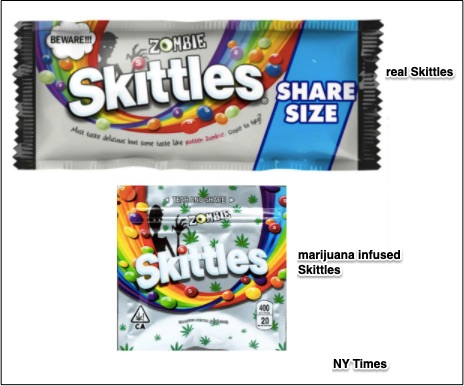 Looking closely at the bottom bag, you can see tiny floating marijuana plants and a warning that alerts the buyer to its THC content.

The question is whether the edibles makers are stealing intellectual property. Mars Wrigley took them to court to get some answers.

Actually, we should say they are in several courts. Because cannabis is a Schedule 1 controlled substance according to federal law, Mars Wrigley had to file complaints in California and Illinois where cannabis is legal. Citing similar packages and slogans, Mars says its Skittles, Lifesavers, and Starburst trademarks have been infringed. They say it is illegal, dangerous, and confusing to associate marijuana edibles with their candy. In return for the (alleged) trademark violation, Mars wants the products to be destroyed, $2 million per counterfeit mark, and the profits from infringing sales. Recognizing that edibles are the fastest growing marijuana product, they believe that names like Cap’n Punch, Stoner Patch Dummies, Trips Ahoy, and Buttafingazzz are no longer a clever joke.

This is not the first time. In Colorado, a court said that TinctureBelle’s edibles resembled  Hershey’s candies too closely. They had to stop producing Ganja Joy, Hasheaths, Hashees, and Dabby Patties. Similarly, Starbucks prevented a cannabis company from mimicking its Frappuccino cups and Mondelez was able to stop the production of Stoney Patch pot gummies:

For a market system to function smoothly, the law has to protect our property rights. Whether it’s a house or a formula, we have to know we can buy, sell, and profit from what we own. For candy, the law applies to a name, a shape, packaging. It also can relate to what we have developed like a slower melting chocolate.

During the 18th century Alexander Hamilton let us know how important property rights are.  Faced with opponents that said we should ignore contracts that supported unlikeable speculators, he said the sanctity of a legal agreement that designated ownership was more important. Hamilton also supported the initiation of a system of patents.

Today, Mars Wrigley says that because it owns the Skittles name, no one else can use it.

My sources and more: In its Sunday Styles Section, the NY Times had the marijuana edibles story. Then, for more of the legal facts, Littlelaw had the details as did Reuters and Crain’s Chicago Business. And finally, for past cases, the Denver Post and eater had the articles.