What Europe’s Green Deal Will Disrupt

Europe’s green deal was first announced during December, 2019. Targeting carbon emissions and consumption patterns, the plan is local and global. But it will especially disrupt the world’s oil markets.

Below you can see that the EU’s dependence on oil diminishes: 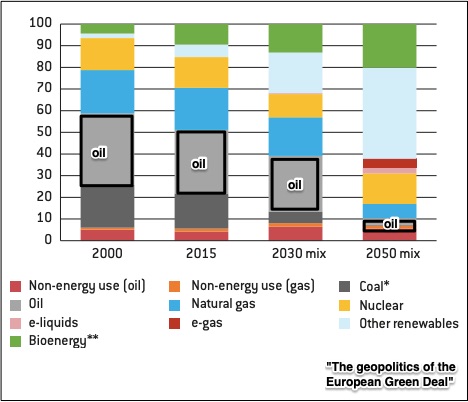 However, as the size of the oil rectangle decreases, we get more geopolitical upheaval.

When you think of the EU’s Green Deal, the word “decarbonizaton.” can come to mind. By 2050, they want to substantially reduce the carbon imprint of what they produce, consume, and import. For now though, the EU is heavily dependent on fossil fuels and imports 87 percent of the oil it uses.

With Russia in the top spot, the EU gets most of its oil from just a few trading partners:

The plan is for those oil imports to plunge: 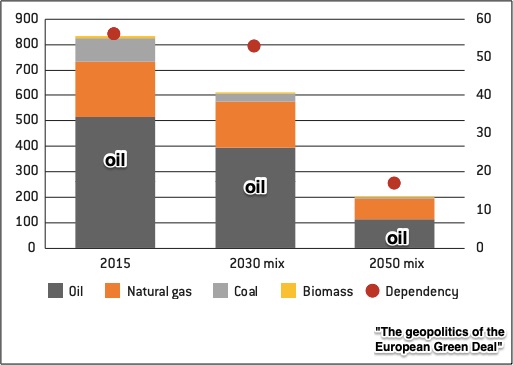 You can see that, at more than 70 percent, Azerbaijan tops the group that depends on Europe: 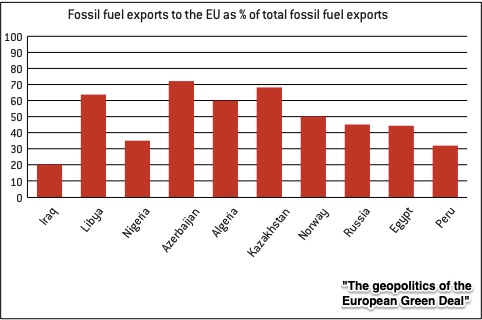 And then, from these individual countries, we get a ripple that travels to world markets. As Europe consumes less, it will shift the world’s oil demand curve to the left and lower everyone’s price.

Compared to other regions, except for Asia/Pacific, Europe consumes far less oil than it produces: 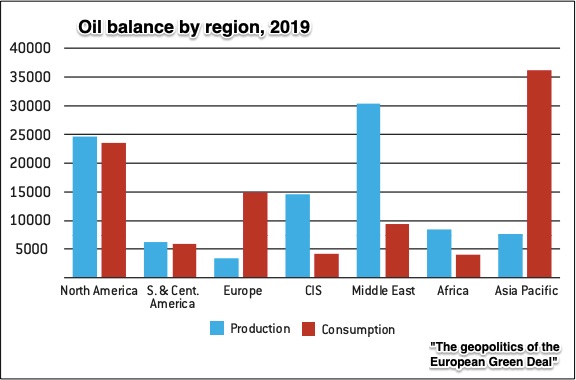 If Europe does push the world price downward, then Nigeria will likely be hardest hit: 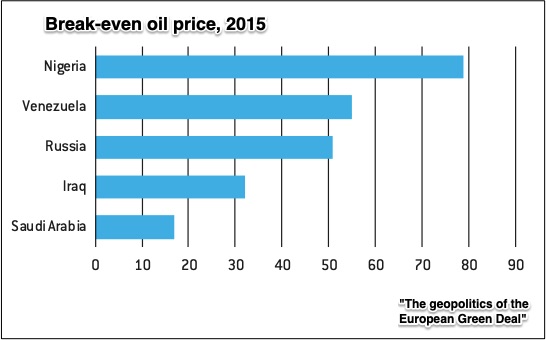 The oil industry reminds us what a commodity boom can do to an economy when it employs the best land, labor, and capital. As it blossoms, other industries wilt. At home it’s tough for non-oil businesses to pay for increasingly expensive resources. Abroad, a nation’s currency appreciates when international markets clamor for the new commodity. The problems start because that stronger currency makes other exports less attractive.

Then, it gets even worse when other industries disappear and government depends on oil revenue for social welfare spending. When the boom turns to bust, there are no replacement industries to fill the void, government money dries up and the source of consumer spending and incomes contracts. It happened in the Netherlands during the 1960s and ’70s (hence the name Dutch Disease).

Today’s oil producers could get Dutch disease from the European Green Deal unless they diversify (like Norway), pivot away to other customers (as Russia might do), or produce oil with a lower carbon footprint (like Saudi Arabia).

My sources and more: For the European perspective, I like to listen to “The Sound of Economics” from Bruegel. They also published the paper on which I’ve based most of today’s discussion. Please note that most of today’s “Bottom Line” was in a previous econlife post.

Our Weekly Economic News Roundup: From Snow Shovelers to Strawberries

What Space Travel Brought Back to Earth