Why We Want the McRib…Again

Briefly available in selected spots around the U.S. during October, 2019, McRib sightings were reported by its fans. Then, it disappeared.

Now it is returning to all of the 14,400 McDonald’s in the country. Based on the McRib locator, it appears to be everywhere, except Wyoming: 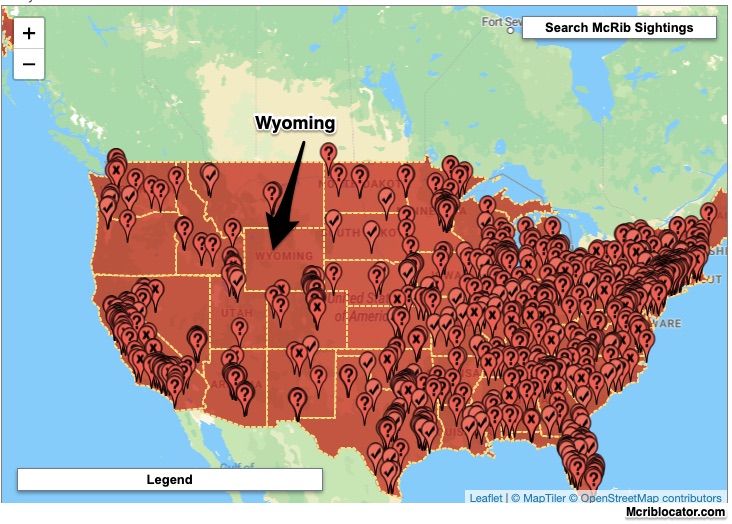 The history of the McRib takes us back at least 40 years. In 1980 or so, the creator of the chicken nugget realized pork also had some possibilities. Using restructured meat technology, he eviscerated the unappealing parts of the pig. Oversimplifying, we can just say that adding some salt and water glue, they wound up with a pork slab that became the McRib. Yes, Americans don’t want stewed pig hearts. But they will eat a more palatable version.

McDonald’s describes the McRib as “shamelessly delicious…with seasoned boneless pork slathered in smoky, tangy barbecue sauce, topped with slivered onions and tart pickles.” A decade ago, Stephen Colbert commented that eating the McRib can count as exercise because one of its ingredients is in yoga mats (azodicarbonamide).

Looking through a more positive lens, Thrillist said it was like a comet. You never know when or where it will return, “but you hope it’s near you.”

Why? An economist has the answer.

In the past, telling us the McRib would not return, McDonald’s arranged its Farewell Tour. Creating some smiles, they posted a mock protest petition from the “Boneless Pig Farmers Association of America.”

And sure enough, the McRib came back.

You can see below that McDonald’s entices us with the McRib’s limited run:

McDonald’s removes the McRib from the menu because of how we perceive that extra bite. One McDonald’s franchisee tells us that when the McRib first returns, he sells close to 200 a day. However, by the end of the promotion, anticipation plummets and his daily McRib sales drop to fewer than 50.

An economist would say that McRib eaters are experiencing diminishing marginal utility because each new serving gives them less extra pleasure. Recognizing how unlimited availability could bring marginal utility down to zero and even into negative territory, McDonald’s soon removes the McRib.

Freakonomics’s Steven Dubner explained that McDonald’s brings the McRib back after waiting long enough for him to forget how bad it is.

My sources and more: When my econlife friend Matt told me that the McRib was back, I went to CNN and Thrillist and the McDonald’s McRib Locator. Then, going back to a past post, I used this tale of its creation and the less appealing facts in this Atlantic piece.

Parts of this post were previously published at econlife.

Deciding What to Deposit In a Food Bank

The Financial Side of a Climate Change Report Card