The Financial Side of a Climate Change Report Card

Through a new kind of report card we can look at whether large companies recognize their climate change risk.

Just like the report cards that I send to students, KPMG established the criteria for their grades. The four graded categories started with the board of trustees. A company explicitly had to name who, at the top, would monitor its climate change risk. After that, they had to articulate the risks. Then they were supposed to create scenario analyses. And finally, they had to give a progress synopsis. They needed to state what had been done to reach a 2050 net zero goal.

A KPMG graphic presented the 12 subcategories of their four big criteria: 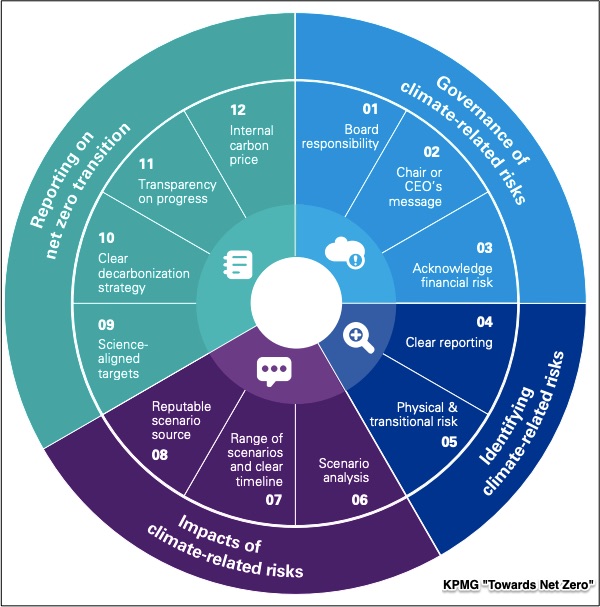 KPMG summarized the results for the G250 in its 47 page report. Instead of naming firms, the whole group was graded. Using percents, they indicated how many of the firms implemented the criteria. An A meant that 70 percent or more followed the guidelines while a B took us down to 50 percent or more. Lower still, a C was 30 percent or more and a D, less than 30 percent.

The grades were dismal. There was just one B among 12 grades. Otherwise, for all criteria, they received Cs and Ds. The worst grades were for the specifics. Only 17 percent had clearly described a strategy to achieve its carbon reduction target.

The report does point out that tech, media, and telecommunications did a better job of recognizing financial risk. But then, like the others, they fell short when doing scenario analysis. There also were geographical differences. Japanese companies received higher grades for board room assignments. Meanwhile, German companies established admirable decarbonization targets.

At the end, KPMG did conclude that the glass was half full. The reason? Five years ago the corporate world had not even recognized climate risk.

Typically, we have not established criteria for assessing the impact of climate change. Starting with the GDP, we do not have a metric. In fact, climate change can elevate the GDP through medical expenses and climate catastrophes.

Instead, because “we manage what we measure,” the KPMG report card encourages companies to quantify climate change risk. As a teacher I can say that report cards create incentives.

My sources and more: Thanks to the Marketplace Tech podcast for an enlightening interview. It also alerted me to the KPMG report.

Why We Want the McRib...Again