How to Give a Better Gift

In a legendary 1993 paper, Professor Joel Waldfogel suggested that holiday gift giving provides less of an economic boost than we expect. The reason is the recipient’s dissatisfaction. A mismatch between what the giver expects and how the receiver feels could diminish the gift’s value by as much as one third.

But there is an easy way to elevate the recipient’s feelings.

The Impact of Gift Wapping

Although not quite how you might expect, we affect someone’s opinion of a present by how we wrap it. Through three experiments, researchers explained how.

In one study, Miami Heat and Orlando Magic fans received a mug with one of the two team’s logos. Sometimes they got the team they favored and other times they didn’t. It didn’t matter which one they got. The response depended on the gift wrapping. When the wrap was messy, the fans appreciated the mug more than when the wrap was neat.

You can see how they wrapped each item: 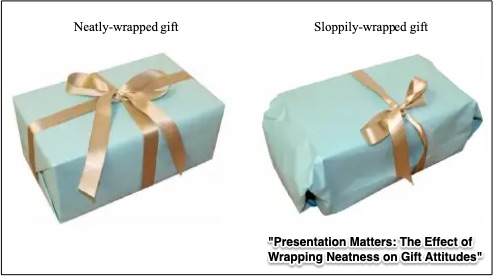 In the second study, participants were shown pictures of sloppy and neat wrapping. Asked about their expectations, they said they liked a neatly wrapped earbuds package less because they expected more. On the other hand, a sloppy wrap reduced their hopes and resulted in a better opinion when they saw the contents were not so bad.

The third try revealed a bit more nuance with two kinds of givers, an acquaintance and a friend. Here, research indicated that with someone we barely know, the wrapping is a cue about the relationship that spills over to the present. As a result, nice wrapping meant a nice gift. However, for people with whom we have a familiar connection, the wrap is just about the present. Because a messy exterior lowers our expectations for what is inside, we tend to react more positively to the contents: 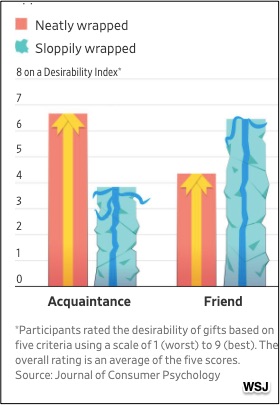 When sloppy wrapping lowers our expectations, the contents of the package appears better. At this point, an economist would say that the sloppiness decreased the gift’s deadweight loss. That loss is the difference between the price of the item and its value to the recipient.

For example, when a sweater from Grandma Gloria cost $75 and is worth $25 to her grandson, George, there is a $50 deadweight loss. But, wrapped sloppily, it appears less bad than what he expected.

When the value goes up, the deadweight loss goes down. Less of a mismatch means more of an economic boost.

My sources and more: Thanks to WSJ (and the “numbers lady”) for alerting me to the gift wrapping study. Then, for more, the University of Nevada had the facts while a gated version of the original paper is here. Finally, in his 1993 paper Dr. Waldfogel explains the downside of gift giving.

Please note that several sentences in this post were published in a past econlife and our featured image is from WSJ.

The Unexpected Cost of a Pistachio Nut