How Dating Markets Have Changed

According to xkcd, our “dating pools” change as we get older.

For middle class women, the typical high school date didn’t even exist until the 1940s. Long before and after, most couples met their mate through friends or family. Through their personal connection, mate selection could be vetted.

But then, in 1964, three Harvard students disrupted traditional matchmaking. Renting time on a massive mainframe computer, they developed a dating algorithm called Operation Match. To receive the names of five “compatible dates” all you had to do was answer 135 questions and pay $3.

The concept was a success and the rest is history. An economist might say that disintermediation set in. The people we knew did increasingly less matchmaking. They were no longer the intermediaries that connected single women and men.

Between 1995 and 2009, the heterosexual couples that met online grew to approximately 22 percent from close to zero. Until 2013, the trend plateaued and then continued as the matchmaking role of friends and family steadily declined.

Below, you can see the red line (“Met Online”) shooting skyward. Meanwhile, ranging from friends (blue) and family (black) to church (turquoise) and work (green), the trajectory is downward. The bar and restaurant line is rising only because app introductions lead to an in-person meeting at a bar or restaurant: 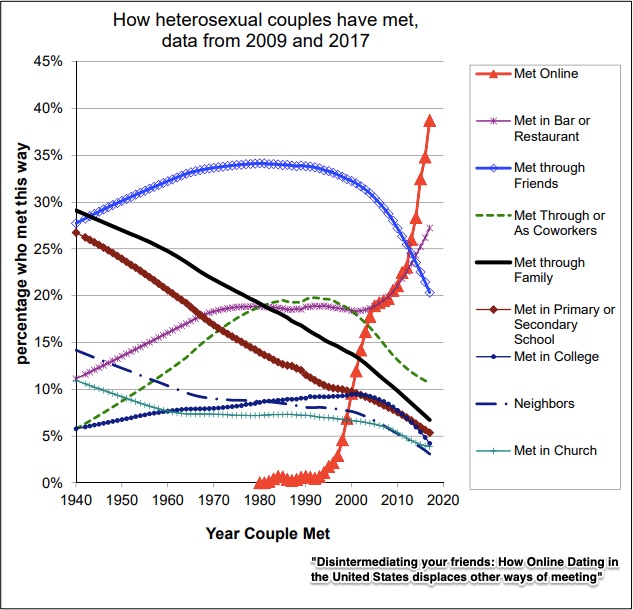 Please do note that the following Pew data indicate a smaller proportion of online coupling. It does not however, contradict the above trend: 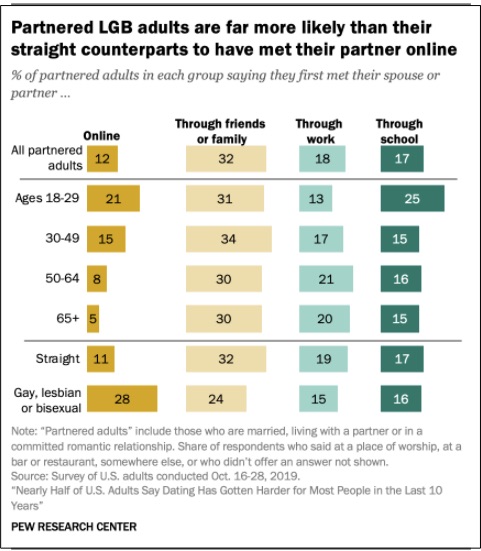 As economists, we can say that a market is not necessarily a place. Instead, it is a process through which supply and demand determine price and quantity. Yes, in dating markets we don’t have a dollar price. Instead, we are looking at the qualities that men and women use to “sell” themselves.

Nobel Laureate Gary Becker (1930-2014) first introduced the concept of a marriage market during the 1960s. At the time he told us that dating behavior is not necessarily about love and marriage. Instead think utility functions. People want to marry because they expect to “raise their utility level above what it would be were they to remain single.” As a result, through the supply and demand of women and men in marriage markets, they find their mate.

More recently, Nobel Laureate Alvin Roth (born 1951) provided insight about marriage markets. Bringing a new word to the discussion, he explained that marriage and mating occur in matching markets that function better if they are sufficiently “thick.” All he meant by “thick” was more transaction volume. With online dating, we have thicker markets that increase the number of matching possibilities.

Or, as one researcher commented, “Your friends and your mom know a few dozen people. Match.com knows a million.” Through tiny dating markets, “Our friends and moms were underserving us.”

My sources and more: An Alec Baldwin podcast on dating led me to this The Atlantic and, here and here. Then, Alvin Roth’s interview with the Minneapolis Fed was ideal for grasping his matching research, this Bloomberg article had some online dating history, and Pew completed the picture. Parts of today’s post were in a previous econlife and The Atlantic was the source of our featured image.