Does a Calorie Label Make Us Eat Less?

According to the 2010 Affordable Care Act (ACA), 2011 was the year that specified food vendors and restaurant chains with more than 20 locations had to post calorie counts. But because of “Big Pizza’s” resistance, they waited until 2018. Domino’s even said that their custom pizzas could have 34 million calorie permutations. Pizza Hut said it had 2 billon possibilities. (Is that possible?)

The ACA goal was to get us to eat fewer calories.

The Impact of Calorie Labels

In a recent study at one restaurant, researchers compared 1546 diners who did and did not have calorie labels on their menus. After the meal, the participants were asked about their calorie consumption.

A significant number of the group without the labels underestimated their calorie intake. Whereas they ordered meals with an average of 1341 calories, their average estimate was 1080. The size of the error ranged from 10 percent to more than 50 percent.

You can see below that the higher the calorie count, the larger the under-estimation: 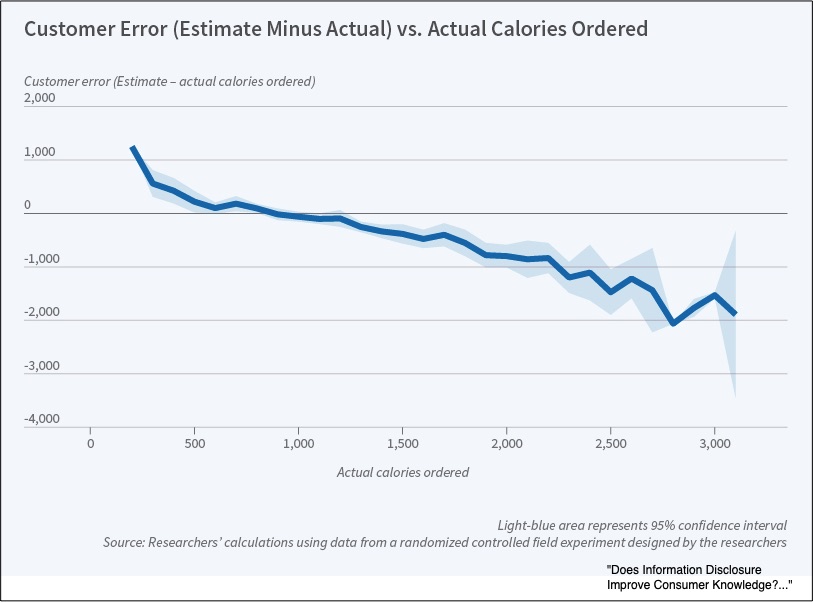 Predictably, the group that had the menus with the calorie labels were more accurate. But not entirely.  Accuracy was up by 4 percent. Still, some underestimated their calorie intake and others overestimated. Men tended to pay less attention to the calorie totals.

At this point I was curious about the impact of knowing your calories. According to one recent study on what we order at fast food outlets, it did not make a huge difference. Using data from 104 restaurants before and after implementing the labeling law, researchers wound up with three years’ of transactions. From 50 million purchases, they observed that there was an initial decrease of approximately 60 calories. However, the decline was not sustained. It soon dwindled down to 23.

A behavioral economist might have suggested that the calorie labels required by the Affordable Care Act will have a minimal impact because of our tendency toward a present bias. In the present, the cost of caloric restraint is considerable. We have a bias toward our current benefits and postponing the cost for later.

My sources and more: Always handy, this month’s NBER Digest alerted me to the calorie study. Then the BMJ had the fast food study.

How the Tesla (Factory) Is Like the Model T (Factory)