When Pandemic Electricity Demand Is Like the Big Flush

During the 2012 Super Bowl, the quantity of water New Yorkers demanded to fill their toilets tanked. At the kick-off, when Madonna performed, and for Mario Manningham’s sideline catch, it plunged. But right after, at trophy time, we had the “big flush.” With 5.4% more demand than the previous week, the water in a local reservoir was down by two inches.

Where are we going? To how public utilities respond to changes in demand.

When the popular BBC soap EastEnders was over, close to 1.75 million people ran to “make a cuppa.” To satisfy peak (tea kettle) demand, five days a week at one time, the British National Grid alerted backup stations and the French grid in case they needed them. It was called the TV pickup.

Now, somewhat similarly (and yet very differently) the coronavirus pandemic has transformed electricity transmission. At seven to eight in the morning, the grid no longer accelerates. Our children won’t go to school, restaurants aren’t prepping for the day, and the heat (or AC) and lights remain off at the office. Instead, home and hospital demand is up.

But still regional numbers indicate widespread decreased electricity demand. For New England, the drop is 3 to 5 percent,  the Mid-Atlantic, 5 to 7 percent, and Washington state, 10 percent. Lower numbers are from Texas with just a 2 percent decline.

Below, you can see that NYC is using less power: 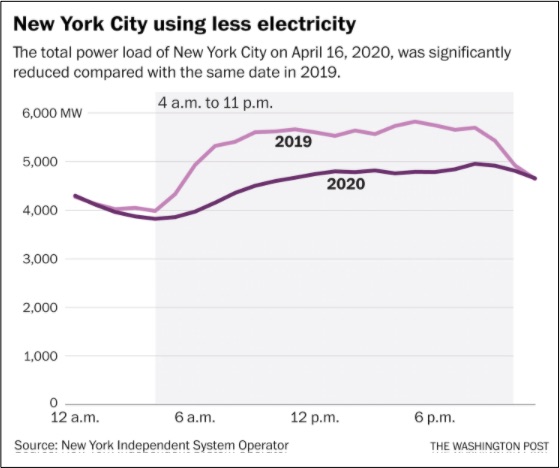 It all amounts to new electricity demand patterns that computers and utility employees need to recognize. Deciding how much needs to go where, they keep track constantly.

We began by asking how public utilities respond to changes in demand. The simple answer is that they need to retain their peak capacity. For that reason, public utilities require a massive capital plant and extensive transmission and distribution facilities–even when they aren’t needed.

Somewhat similarly, New York’s waste water treatment plants need to maintain peak capacity. They know that even during a pandemic, we create the “big flush” during the late morning.

My sources and more: It’s always interesting when new facts make the past even more interesting. My past was the Super Flush and extra cuppa demand. And now, The Washington Post and this energy news wire had the details for pandemic electricity demand.

Please note that the “cuppa” paragraph was in a past econlife post.

The Problem With Predictable Surprises