Why The Eddie Murphy Rule is About More Than Orange Juice

It’s been approximately 35 years since Eddie Murphy appeared on Saturday Night Live and starred inTrading Places. He returned last night to SNL. So too has the relevance of  the orange crop in Trading Places.

The Dodd-Frank Wall Street Reform and Consumer Protection Act was passed in 2010. You can find Section 746 on pages 364 and 365 of the law’s 849 pages. Section 746 has been called the Eddie Murphy Rule.

The Eddie Murphy Rule came from these four minutes of Trading Places:

In those four minutes, the Duke brothers lost huge money after Eddie Murphy and Dan Ackroyd fed them fake USDA reports. The Dukes thought a bribe had gotten them pre-release orange crop info that would elevate prices so they started to buy. Since prices were actually going to sink, Murphy and Aykroyd were selling contracts. When the real report was released, after prices plunged, they bought them back. (They followed the basic prototype for selling short. That just means you sell high before you buy low. How? First you borrow and sell. Then you wait for markets to drop, buy, and return what you borrowed.)

Until Dodd-Frank’s Eddie Murphy provision, it was not illegal to base trades on crop information before it was released. As a result, the Trading Places protagonists were not breaking the law. However, Dodd-Frank said you could not use “nonpublic information misappropriated from a government source.”

The Bank of England

Somewhat similarly, “nonpublic information misappropriated from a government source” was in the news last week. WSJ tells us that an audio feed from the Bank of England was seconds ahead of the broadcast news conference. As a result, traders with (paid) access to the faster feed could trade on interest rate decisions before anyone else:

The Bank of England is not alone.

At the U.S. Federal Reserve, journalists are given sensitive information in a “lockup room.” This lets them sift through what could be lengthy and complex material. Then, at the precise release time, the information embargo ends and they can send a headline, like the following to, for example, a Bloomberg terminal: 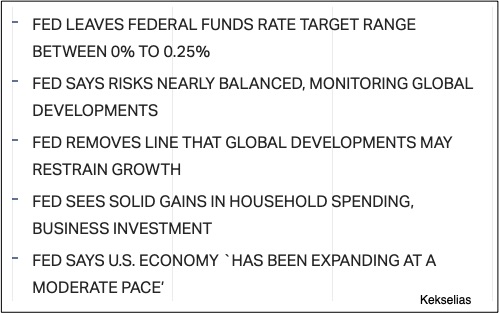 Where are we? You can see that the Eddie Murphy Rule is about more than orange juice and commodities trading. It relates to how information moves markets. And why that information needs to be disseminated fairly.

My sources and more: Long ago, after Dodd Frank was passed, econlife looked at the Eddie Murphy Rule. Now, it’s in the news again from Vanity Fair and Bloomberg (un-gated at SF Chronicle).  From there, I suggest the leap to this explanation of the information embargoes at the Fed and the BLS.  Then, for more, WSJ told about the Bank of England glitch and the NY Post, about one from Bloomberg.