Trade talk focuses on tangible things. We can imagine cars and computers and those big container ships.

Really though, we trade so much more. But you just can’t see it.

When a U.S. citizen pays the check at a restaurant in France, she has purchased a global service. Or, when someone in Mexico calls Uber, that is again, international trade.

1. The global trade in services can be divided into four categories.

One group is called the Cross Border Trade because those services are sent from one place to another online like downloaded podcasts or emailed legal advice. Next, the Consumption Abroad group takes us to activities that include tourism with people paying for hotel rooms or eating at cafés as they travel. Then, we have the biggest section coming from Commercial Activities because businesses abroad typically need a service like banking to complete a transaction. Finally, the smallest services component requires an Individual Presence–perhaps an architect or an IT consultant–going somewhere with her expertise.

The global services required by commercial activities far exceed the three other categories: 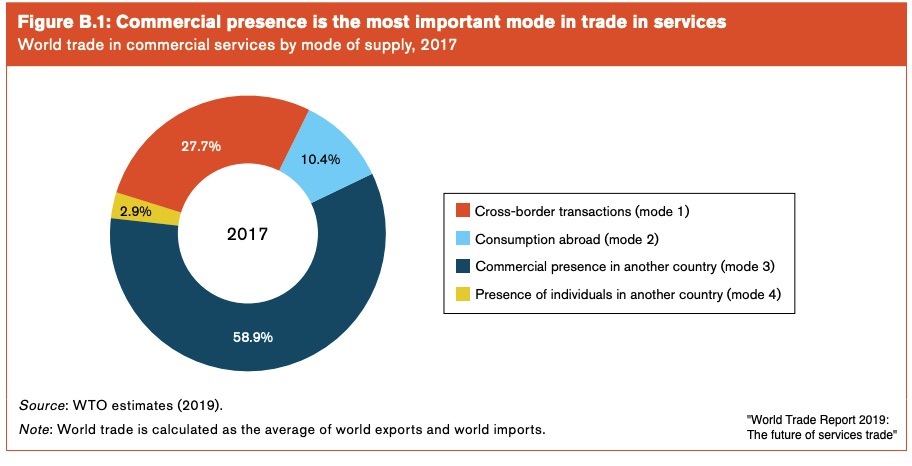 2. Trade in services can be divided into 15 categories.

In a list of 15 globally traded services, distribution and finance are the largest. Next are telecommunications and computer services, and then transport: 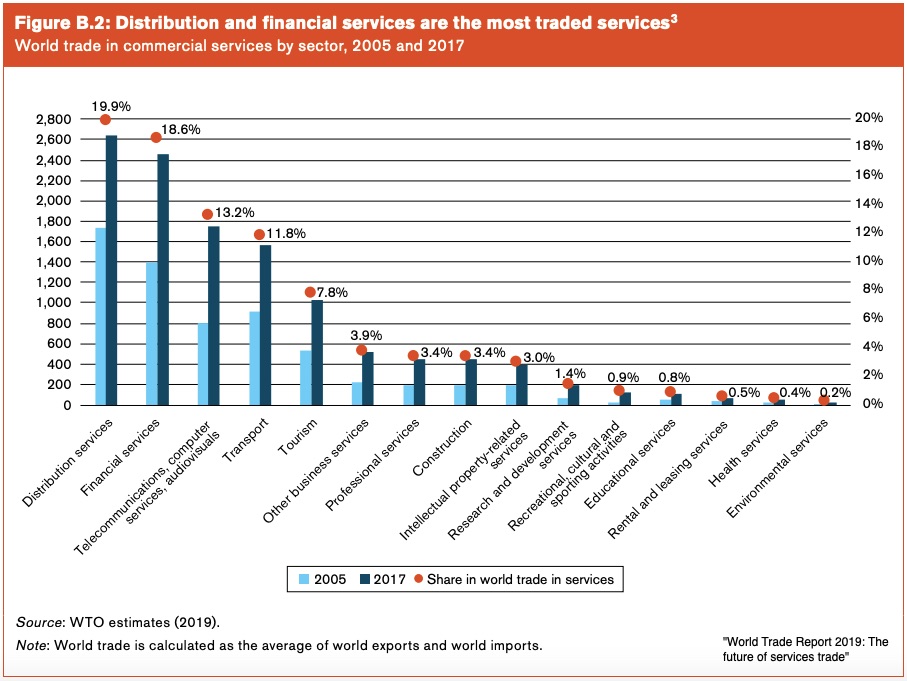 3. The films and music that we download are a part of the trade in services.

To get an even clearer image of the trade in services, we can think of all of the films and music that we download. Yes, if someone sends a DVD, then it is a good. But whenever we stream a song or a film across a border, each transaction becomes a part of international trade: 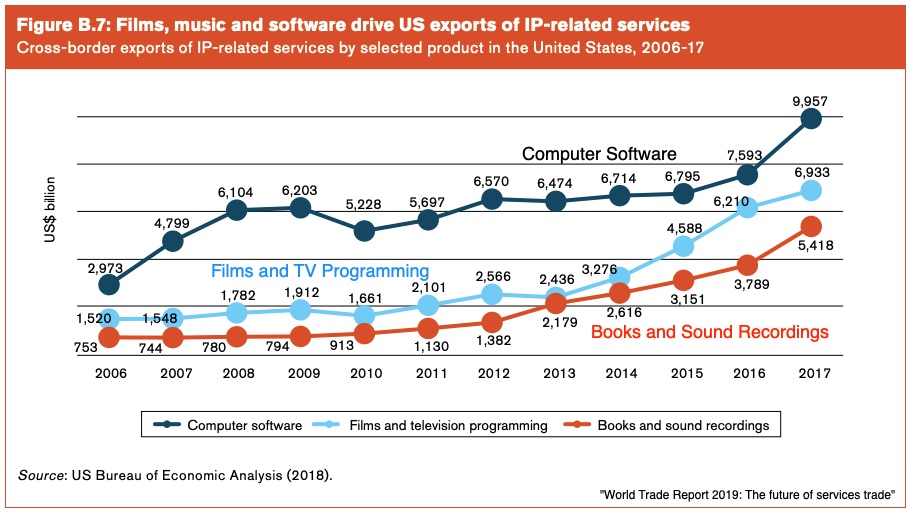 4. The developed countries play the biggest role in the services trade.

5. In the developing world, five economies dominate the trade in services.

Among the five, China is the leader for imports and exports. Their Belt and Road initiative is cited as a major source of exported services: 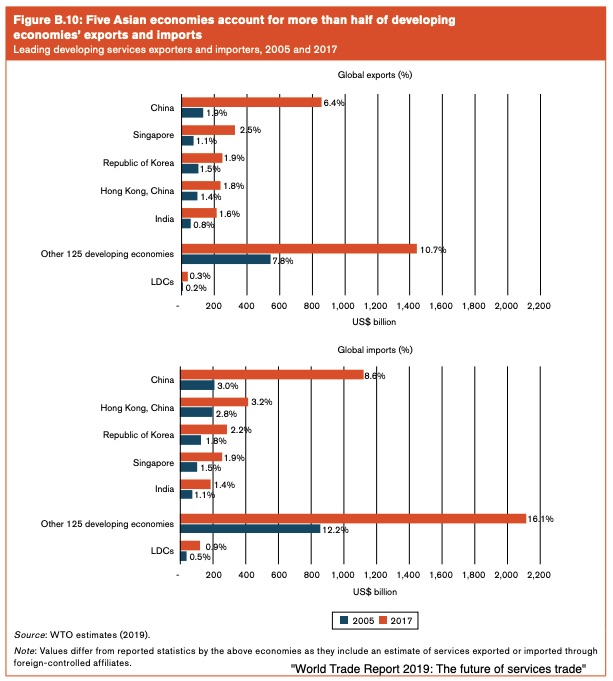 But you can see that the role of developing nations, including the big five, has grown considerably since 2005: 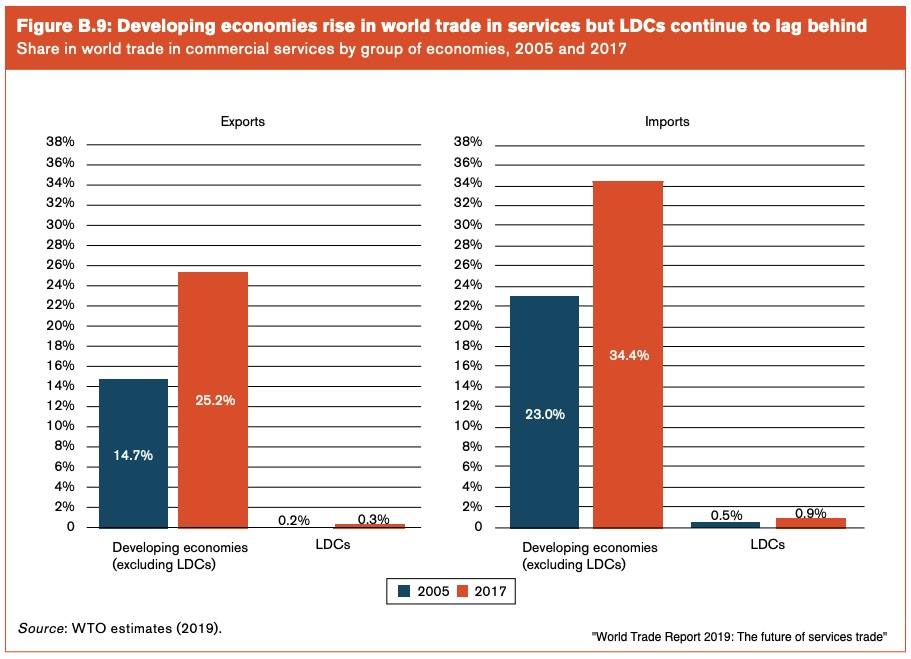 Our Bottom Line: Visible and Invisible

Trade is about the visible and the invisible. We are most aware of the goods we import and export and the domestic jobs that create them. The services we don’t see though have become increasingly important.

So yes, they are somewhat invisible. But as economists, we know they are not at all missing.

My sources and more: Thanks to the Conversable Economist for alerting me to the WTO global services report. But if you don’t want to read 232 pages do listen to the summary in a 20-minute Peterson Institute Trade Talks podcast. Then, for an unrelated facts sheet, Brookings had more.

How a (Resource) Curse Created a Chicken Shortage