The 28 (soon to be 27) nations in the European Union have been trying to figure out their next 7-year budget. In 2018, the U.K. share was close to £8.9 billion (€10.3 billion). Now, with their third largest source of revenue soon to be gone, there’s lots to negotiate. The new budget kicks in at the beginning of 2021. 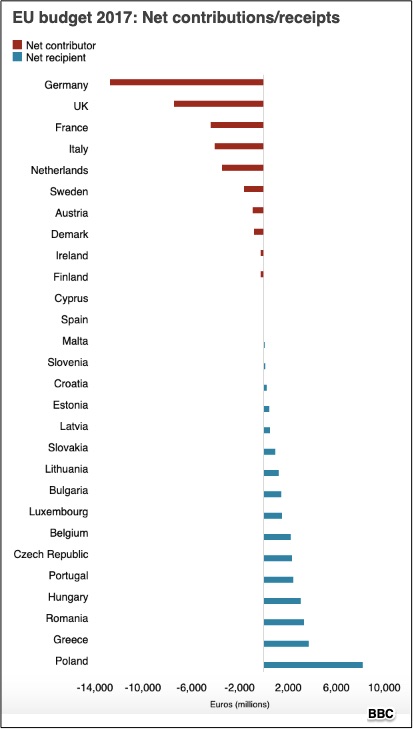 Next, I found it handy seeing what the U.K. contributed to the EU budget in 2018 as an example of the budget dynamic. Rather than a single amount, we have EU budget money going back and forth to result in what approximates a final sum.

The UK started with £14.4 billion contribution that was composed of its GNI (gross national income), VAT (value added tax) and customs share. After that, we have a £4.2 billion “correction mechanism” that brought it down to £13.2 billion. And then that £13.2 billion decreased further because of the £4.3 billion they received for EU transactions.

The result was a net contribution closer to £8.9 billion: 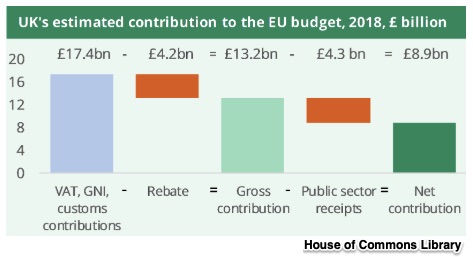 The EU General Affairs Council has been discussing its 2021-2027 budget. However, the two big issues–the size of the pot and rebates–were so controversial that a Finnish EU Presidency proposal evoked a fist banging response.

Naturally, they have to decide the size of the pot. The “Frugal Five” (Sweden, Denmark, Austria, Germany, the Netherlands) say the EU budget should reflect 1 percent of the group’s Gross National Income (GNI). Meanwhile, the European Parliament wants an uptick to 1.3 percent.

They are also split over rebates. You see above that the U.K. got a £4.2 billion rebate. The fight here is about whether even to have a “correction mechanism.” Led by France a group of 10 says no. They want to abolish any device that caps what the richer nations pay. Pointing out that its net contribution would increase from €13.5 billion (2018) to €30 billion (2027) without money returning to them, Germany expressed an emphatic, “Yes for rebates.”

Whether it’s the EU or the U.S., always budgetary spending has a cost. And yet, all too often, cost is expressed as the euros or dollars that will be spent. Instead, as economists, let’s be sure to look for every decision’s opportunity cost–a next best alternative that is sacrificed.

I suspect that divergent opportunity costs are causing the EU’s contentious negotiations.

My sources and more: Thanks to FT’s “Brussel’s Briefing” email (whose un-gated updates I enjoy) for alerting me to the “budget bloodbath.” At first remaining with FT, I went here and also to the House of Commons Library. But if you go to just one article,  the BBC’s  was the best.

The Hidden Side of Amazon Prime

Our Weekly Economic News Roundup: From a Wealth Tax to a Kid's Allowance