Today, the Rugby World Cup starts in Japan. In addition to dealing with a sporting event, Japan will attract hundreds of thousands of fans who drink a lot of beer.

At a typical rugby match, a Japanese fan drinks a single beer. Other rugby fans, from England, Australia, and Ireland, for example, drink six cans and many more. Or, as the president of one pub chain said, “Japanese drinkers usually slow down after two to three pints, but the foreign fans, they can drink for three hours at the same pace, sometimes even up to four or five hours.”

At a 2017 rugby game in Yokohama, the beer ran out before the kick-off. Somewhat similarly, the city of Oita Japan had none by half time.

So they’ve been adding snack stands and vendors walking through the stands with draft beer. They are planning for brigades of trucks and boats to carry beer from the factory to the fans. One pub manager will have 5 to 10 times as much beer at his bar as well as a backup supply of extra kegs outside.

While Heineken is the official beer and the only one that will be sold at stadiums, Asahi Group Holdings and Sapporo Holdings Ltd. are the other two major brewers. Below, you can see where the supply chain has to stretch from the one Heineken brewing plant in Japan: 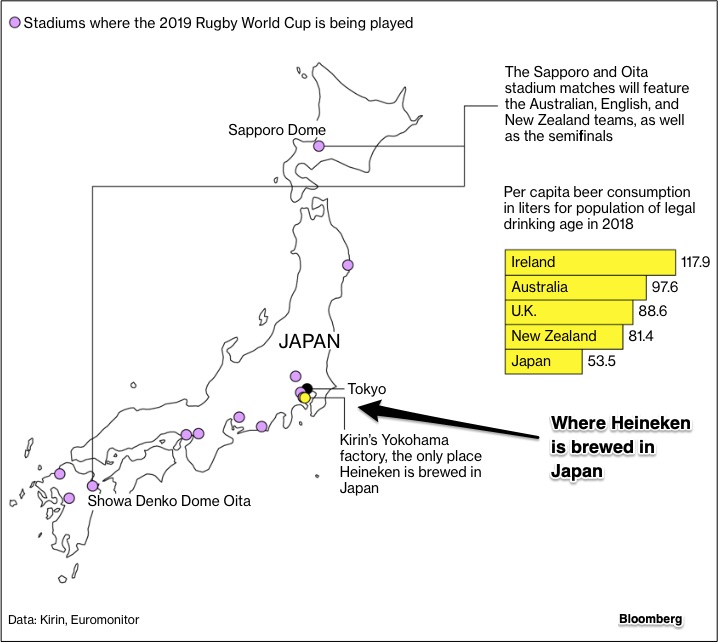 World Cup organizers reputedly prepared a 40-page presentation for restaurants.. One slide said that ““Rugby fans will drink every city dry!” Warned that the revelers could disrobe, the police were supposed to use a “light touch” when dealing with fans.

And yes, this is economic. The Japanese want to encourage tourism–especially because they will host the 2020 Summer Olympics…even if they are swamped by a sea of drinkers

An economist could say that between September 20 and November 2, beer demand in Japan will skyrocket. Reflecting the change, both the demand and supply curves will shift to the right and thereby elevate equilibrium quantity: 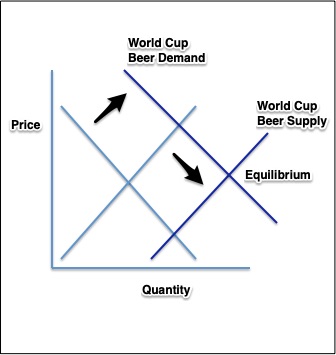 But it is impossible for two shifting lines on a graph to convey the celebratory behavior that they represent.

My sources and more: Thanks to a Bloomberg radio report for alerting me to Japan’s beer shortage. From there, I discovered a slew of articles and blogs. Reuters looked at the Japanese police and Asahi.com told about a beer test run and gave me all of the info on the teams. But the best article was from Bloomberg.