How to Measure the Size of Our Cultural Divide

In a new paper, researchers considered our cultural differences. Looking as far back as 1965 and as recently as 2016, they hypothesized that if they knew our preferences in four areas:

Then they could guess our …

Their goal? To identify our cultural differences by measuring how successfully they guessed to which groups we belonged. For example, if they figured out that you were affluent when told your social attitudes, then there was a cultural divide.

Below you can see their results. Essentially, our consumption patterns reflect the greatest differences among us while our time use shows more similarities. However, over time, our cultural divide was pretty consistent: 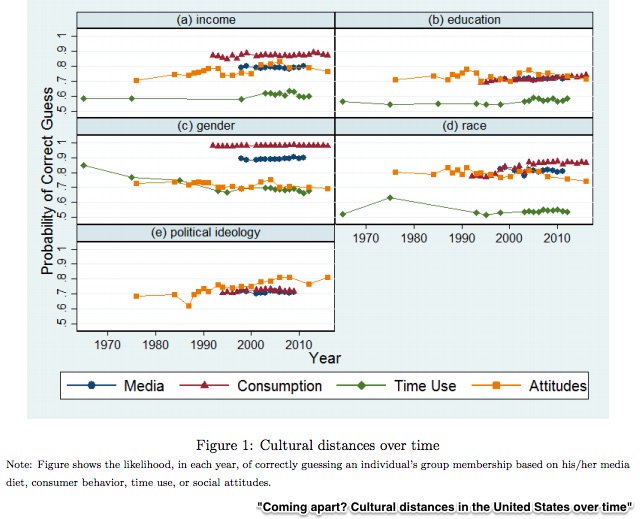 For now, let’s look at how our media preferences divide us.

The magazines we read, the TV shows we watch, and the movies we see provide clues about our income, education, and politics. Watching Gone Girl and the Super Bowl in 2016 were indicative of high income as was reading Consumer Reports in 2011. Similarly, with education, researchers found magazines like Newsweek and Time were most read by those who attended college.

TV shows and movies that are most indicative of more education:

TY shows, movies, and magazines that are most indicative of being more liberal:

We could say that we have three kinds of capital. Our physical capital refers to the tools, the equipment, and the structures that let us produce goods and services. Similarly the human capital with which we are equipped makes us more productive through the education and skills we acquire. To these, we can add our cultural capital. Here we are talking about a shared identity that can facilitate economic mobility, diminish political conflict, and grow our human capital.

So where are we? Our different media preferences reflect a cultural divide that is affecting our cultural capital. I would ask though where the divide is about a positive dose of diversity and where it needs to be minimized.

My sources and more: Today’s post is based entirely on this NBER paper.

The Gift You Didn't Want

December 2018 Friday's e-links: From a Trek Across Antarctica to a Pizza Scam and Two Physicians with the Same Last Name