How Legal Marijuana Could Make the Canadian GDP Too High

On October 17th, Canada became the biggest country so far to legalize marijuana. Meanwhile, statisticians had to figure out how to include it in the GDP.

It was not quite the way The Economist imagined: 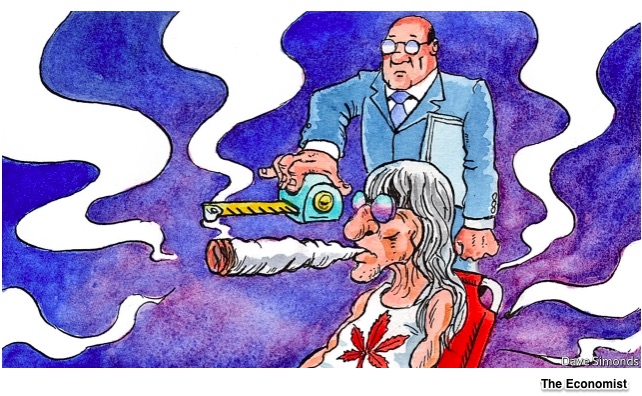 Canada’s statisticians were concerned that recreational marijuana would make their GDP unusually high (sorry). TD Bank estimated it could boost Canada’s 4th quarter GDP growth rate by almost 50% from 2% to 2.9%.

To avoid this GDP spurt, Statistics Canada has been trying to figure out what people were spending on marijuana when it was illegal. Then, if they revised the GDP back as far as 1961, the current increase would make sense.

Their calculations had to include production, distribution, and sale. They needed to estimate the size of the marijuana economy (maybe one in every seven individuals). Then, they went to priceofweed.com for data on price and frequency. And they created an app that people could report usage to anonymously. And they used Dark Crawler to get more price history.

You get the picture. Statisticians were in shady territory. One researcher even had his computer account shut down until he convinced the authorities he was doing legitimate work.

The future will be much easier. To get their cannabis numbers, StatCan will be surveying 10,000 households every three months.

Our Bottom Line: The Underground Economy

Payments that people “hide” from their government take place in the underground (aka shadow) economy. They typically consist “of market-based economic activities, whether legal or illegal, that escape measurement because of their hidden, illegal or informal nature.” Canada’s StatCan estimated that the transactions in its underground economy were close to $51.6 billion in 2016–maybe 2.7% of the GDP.

As for marijuana, maybe $3.2 billion was spent underground.

My sources and more: Before and after legalization, it can be tough to measure marijuana’s GDP impact. The Economist and the Financial Post told some of the story for Canada while Colorado Public Radio summarized a Pueblo County Colorado study. Then, for the big picture, Quartz had the world survey of where marijuana is legal.

Our featured image of the Canadian Parliament and a slightly modified Canadian flag is from the Financial Post. and one stat in this post was edited after publication.

Our Weekly Economic News Roundup: From an Uber Apology to a Chase Logo