The Red and Blue States That Agree on Halloween Candy Favorites

In “research” on the sweets we prefer, CandyStore.com added up what went where before Halloween. The results provided a picture of yet another way in which our nation is divided.

Happily though, the disagreement is not between red (R) and blue (B) states. Pennsylvania (R), South Carolina (R), California (B), and New Jersey (B) like Skittles the most. Alabama (R) and Rhode Island (B) prefer candy corn. And in Texas (R) and Oregon (B), the favorite is Reese’s Pieces.

As a nation, this is our Halloween top ten: 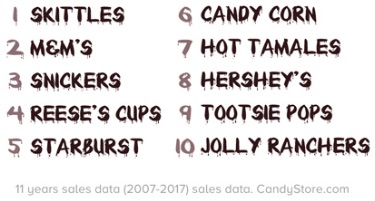 CandyStore.com also looked at other Halloween surveys. Combining results from sources that included Buzzfeed, BusinessInsider, and Thrillist, they created a second top ten list. Then, Reese’s Peanut Butter Cups were #1, Snickers, #2, and Twix #3. Close to the bottom, Skittles was #9, just ahead of Hershey Bars.

As for the worst Halloween candy, this was it. (I added the label and arrow.): 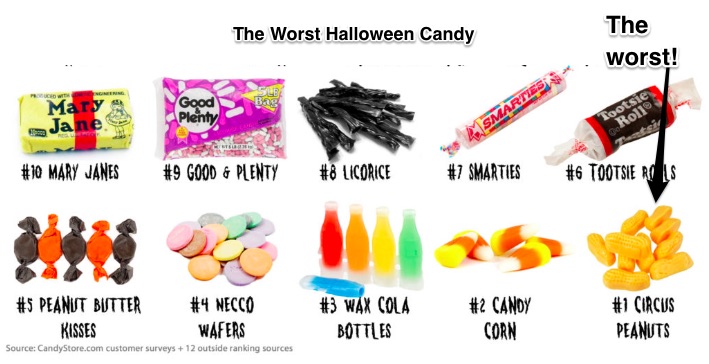 For economists, Halloween is about more than candy. Through yet another top ten list, you can see that it is chock full of economic ideas:

8. Competition: the first to make candy corn in 1898, Jelly Belly Candy Co. now competes with Brach’s and others. Mars though dominates the Top Ten list.

7. Globalization: not really. Almost all of the candy is from Mars and Hershey in the U.S. Jelly Belly is California-based. Yes, some candy is from Nestlé but none in the top ten.

6. Demand: topped by princess, superhero and Batman for kids, the list for adult costumes is led by witches, vampires, and zombies. Meanwhile, many of our pets will be pumpkins, hot dogs, and bumble bees.

1. Diminishing Marginal Utility: after all of that candy, we are happy to wait a year until the next Halloween.

My sources and more: Thanks to the numbers person at WSJ for reminding me it was time to return to Halloween economics. For my Top Ten list, the National Retail Federation website.had more facts than you need to know about Halloween. But it was the most fun to see each state’s candy preference at CandyStore.com and then to ponder the broader significance. (I checked Wikipedia for red and blue states.)

Where the Glass Ceiling Refuses to Shatter