Last spring, a young Norwegian woman worth close to $1.25 billion was pulled to the side of the road in her Audi Q3. Because the authorities determined that her blood alcohol was three times the normal limit, this month, an Oslo court fined her $30,250 (250,000-kroner). She also had an 18-day prison sentence and lost her license.

The Norwegian judge said the defendant’s wealth was a consideration. Yes, her attorney told the court that his client lived with her parents and was a student. And the law typically levied a fine that was 1.5 times a gross monthly salary–an amount that she did not even earn. So, the court decided it had to base the verdict on her gargantuan net worth.

In Europe, the Scandinavian countries typically have the highest traffic fines because they base them on income: 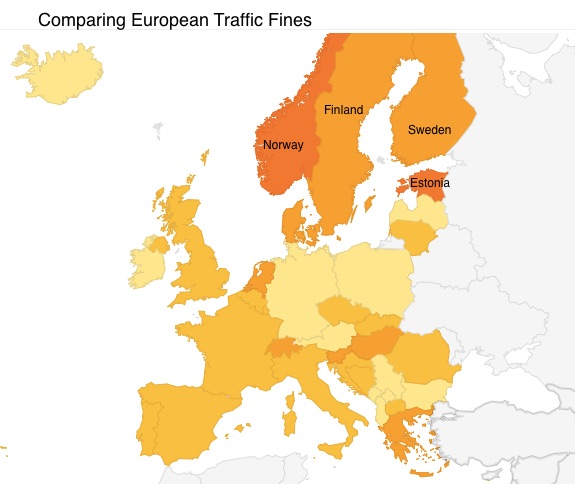 Slightly less than a century ago, Finland was the first European country to use income-based penalties. During the 1980s, Staten Island, NY and Milwaukee, Wisconsin experimented with the concept but it never stuck. In Europe though, Sweden, Switzerland, Germany, Austria, and France are among the countries that still use it today.

Called day-fines, traffic penalties based on income relate to a larger issue. They take us to how much more the wealthy should pay. And that takes us to the U.S. tax reform debate.

While the Tax Cuts and Jobs Act passed by the U.S. House of Representatives has 450 pages, we can look at a few major issues that relate to what the wealthy should pay:

A lower estate tax benefits those who are more affluent.

Some say it is never fair for those with less to pay more and yet it happens everyday at the cash register. For every sales tax, whenever everyone pays the same amount, the poor are paying a higher percent of their income. For that reason the tax is called regressive. By contrast, U.S. income tax rates are called progressive because the more affluent pay a higher proportion of their income than those with less. And then finally, we have proportional taxation where the percents are the same. However, with proportional taxation, those with more pay more.

So where are we? Whether contemplating regressive, progressive or proportional taxation, we have to decide whether we believe ability to pay should be our rationale for generating government revenue…even with traffic tickets.

My sources and more: The Norwegian fine was widely circulated by the A.P. and described here in Norway. However, if you want the overview, I recommend the Atlantic and this paper for some history and analysis and this European summary (my map source). Then, leaping to U.S. tax reform, this is the entire House Act. But for the briefer summary, you can go here (the source of my chart images) and here.

Please note that parts of today’s Our Bottom Line was in a previous econlife post. Also note that nowhere could I find Norway’s traffic penalties called day-fines although they appear to resemble them.

Why There Is No Such Thing as a Free Coupon