Why SALT Might Not Be Good For Our (Financial) Health

In the Tax Cuts and Jobs Act, legislators eliminate deductions to offset lower tax rates. One target is SALT–state and local tax deductions.

Certain state and local taxes are federally deductible. But it does depend on the state. While states that rely on sales taxes can let residents deduct them, others selected their income tax. And the property tax deduction can apply to all states.

So yes, while SALT does make state taxes less painful, high tax states and high income households like it the most. More precisely, as income rises, so too does demand for SALT.  Households earning $200,000 or more are much more likely to claim it than those with income below $50,000.

You can see why legislators in the darker blue states (below) like California, New York and Illinois have been especially vocal about a SALT repeal: 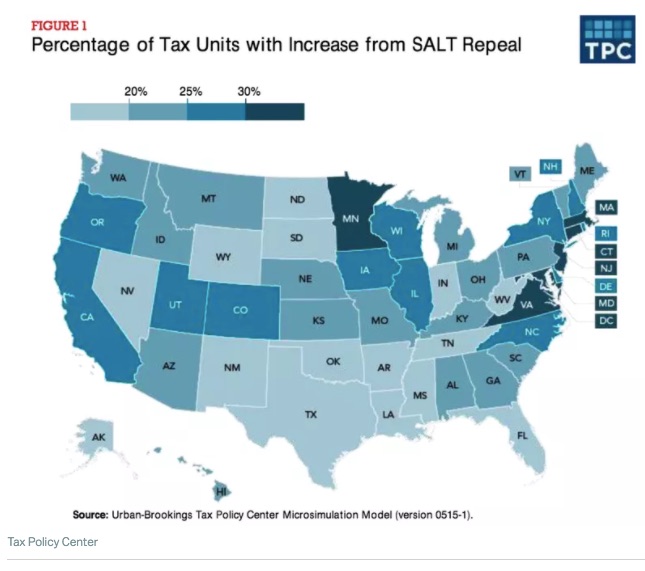 Our Bottom Line: Types of Taxes

When analyzing SALT, three words can be helpful. We can ask if the tax provision is progressive, regressive, or proportional.

Progressive: Progressive taxes take a higher percent from those who are more affluent. With its increasingly higher marginal tax rates our income tax is the perfect example.

Regressive: By contrast, a regressive tax is more costly for those who earn less. Here, a sales tax is the perfect example. Imagine a $25 purchase at a gasoline station. If the tax is $5, it will be 5% for someone who earns $100. However, for the people who earn $200, it takes 2.5% of their income. The higher percent for the less affluent make the tax regressive.

Proportional taxation: With the third basic tax approach, everyone pays the same percent. If you think of the U.S. Medicare tax, all of us pay the same percent from our paychecks. That total could be 2.9% or we might split it with our employer.

SALT has been called regressive. If the more affluent get the benefit, then the flip side says that those who earn less bear the burden.

My sources and more: Do go to Vox for the perfect primer on SALT. Next,  Mother Jones is a possibility for its red blue state spin. And finally, but not recommended, here is the actual 400-page legislative proposal.