Norway is debating the “Tesla tax.”

Targeting all heavy electric cars, the tax increase for some Tesla models could be massive:

Even more broadly though, Norway is deciding when and if to diminish electric vehicle (EV) subsidies.

Norway leads the world in EV ownership. You can see below that other countries are not even close:

Continuing the trend during September, 60% of all of Norway’s auto sales were EVs and hybrids.

The reason? The incentives.

Imagine having access to the bus lanes during rush hour, saving massive tax dollars, and getting free charges (with two chargers every 50 km). In addition, on toll roads the levy is lifted for all EV owners. EV drivers who live on the island of Finnoy save $177.50 a week because the tunnel that connects them to the mainland is a toll road. As one EV buyer said, “To be honest, the reason for buying this was a little bit about the environment, but mostly the savings.”

Specifically, these are all the perks:

But now that the gasoline car and some EVs are almost equal, and the EV momentum is there, should subsidies be eliminated?

FT did a comparison graphic: 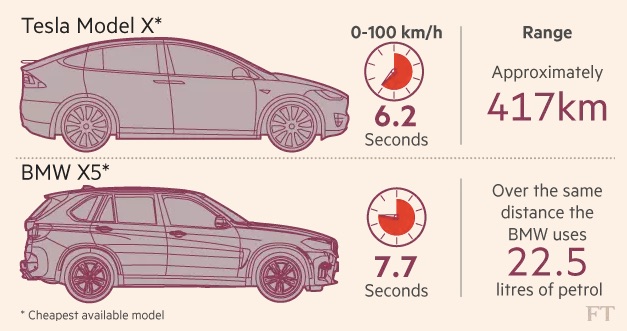 Defined as sacrifice, the cost of the subsidies is money and more.

Subsidies have cost Norway somewhere between $1.05 billion and $437 billion in lost revenue. To that amount, Oslo can add the millions it spends on free chargers. Meanwhile, other examples of lost revenue include what ferryboat operators forgo in free trips for the electric cars they transport.

People driving conventional cars complain that they have access to fewer parking spaces. A bus driver told of the impact of EVs in the bus lanes.”The delays have a cost for society. Time lost by thousands of our passengers in traffic is far greater than that gained by a few dozen electric car drivers.” Others say the demand for public transport has declined because a subsidy has made the substitute–a second car–so much cheaper. People also point out that 50% of all commutes are on public transport. But the money is disproportionally spent to subsidize EVs.

However, to show the advantages of a subsidy, an economist could start with this graph. A lower price for EVs is the direct result of the supply side boost: 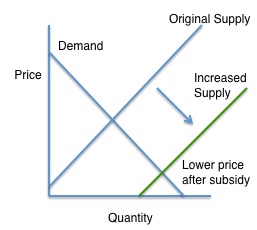 And beyond this, we should name the other EV benefits they could lose if the subsidies were phased out. Of course cleaner air is at the top of the list. Furthermore, when Denmark eliminated its EV subsidy, Tesla sales plunged from 2738 in 2015 to 176 in 2016 (Bloomberg).

So, returning to Norway’s “Tesla tax” debate, where does that leave us?

As economists, we need to identify the tradeoffs.

My sources and more: Quartz and FT had the perfect update to our 2014 econlife post on Norway’s EV population. Then, here is more on the “Tesla tax” while other case studies are here.and here.

Please note that several sentences in Our Bottom Line were published in a past econlife post.

The Economics of the Pumpkin Slingshot

How Brexit Could Change a Big Mac