The Economic Side of the Eclipse

Where are we going? To the eclipse economics of small towns, airfares, goats and productivity.

Small towns have become a magnet for eclipse watchers. Their overnight accommodations and even backyards are booked, restaurants have stocked up and gridlock is a concern. From cars to campers, Oregon predicts a massive traffic event. They have even prohibited travel by trucks with extra wide loads from August 18 to August 22.

Called one of the top 10 places to see totality, tiny Madras, Oregon, population 7000, expects 100,000 visitors. While one restaurant owner said he has accumulated 150 pounds of ground buffalo meat, most expect shortages. Getting cell phone service will be tough and one news site said there are “many, many toilet questions.”  You can see that while municipal expenses will temporarily rise, towns like Madras will enjoy a brief spike in business and tax revenue.

There is 0% chance of rain in Madras:

When Washington Post reporters checked round-trip airfares from Atlanta to a variety of destinations between August 20 and 22, they identified a correlation between the eclipse path and the fare. At $1466, Jackson, Wyoming was the most pricey. Similarly, although Charleston South Carolina is only 300 miles from Atlanta, round trip would cost you $938.

As you can see below, the closer to totality, the higher the fare. 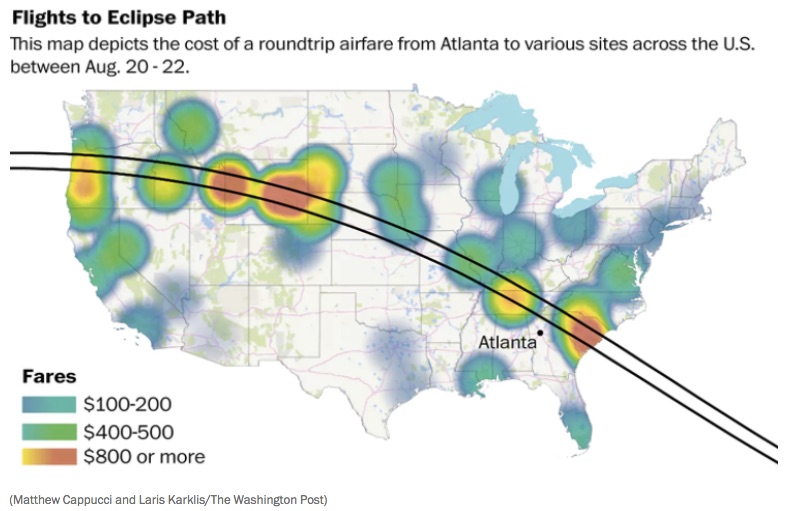 Looking at airfares slightly differently, you wind up pretty much with a downward sloping curve when you attach the fare/location dots: 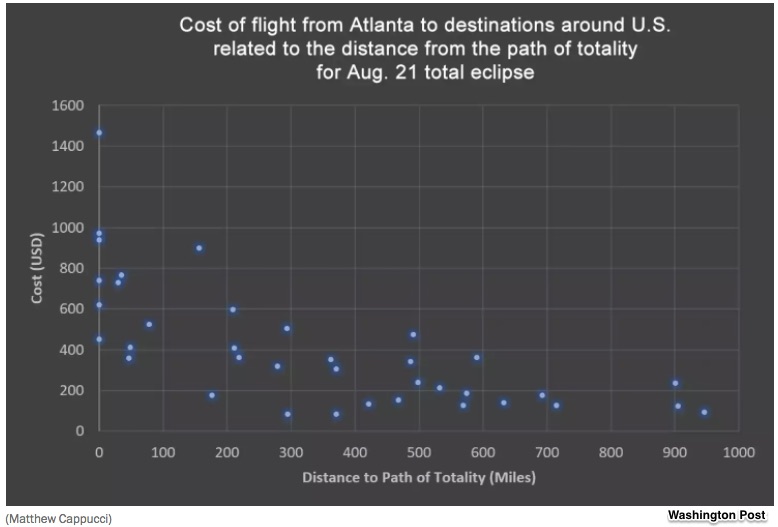 It is also possible to book a flight that lets you see the eclipse from 35,000 feet. Passengers on Southwest’s Flight 1368 from Portland to St. Louis departing at 9:05 PDT are paying somewhere up to $466 for the experience.

Finally, if you want to experience the U.S. agricultural economy when you watch the eclipse, the Washington Post has identified where you might want to travel. To be with a goat, you just need to go to central Tennessee or near the Georgia/South Carolina/North Carolina border: 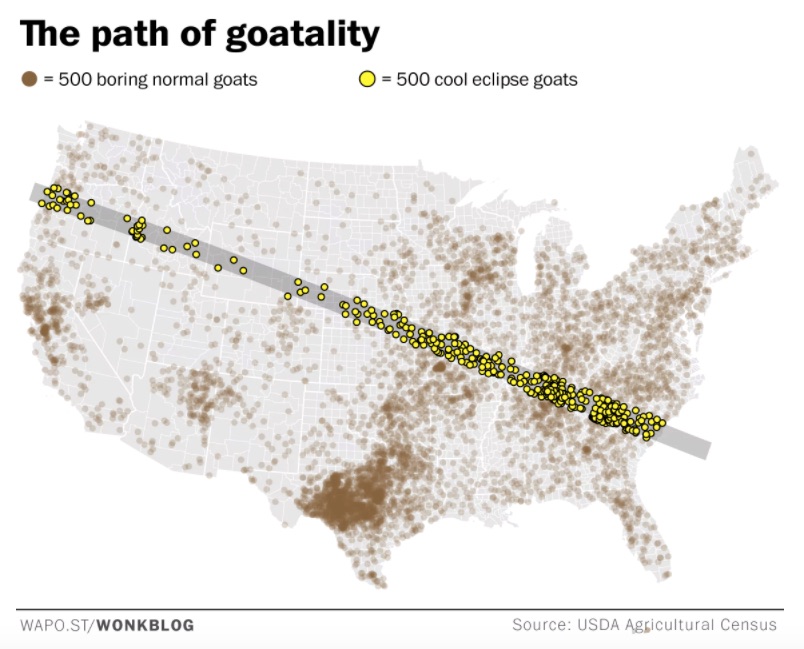 Although economic activity is picking up along the eclipse’s path, we can expect a dip in productivity. I doubt if the numbers really can be quantified but one outplacement firm has tried. They based their totals on each of 87 million workers who will lose 20 minutes of their on-the-job time. If they earn an average hourly wage of $23.86 then 20 minutes apiece means $7.95. Multiple that by 87 million and you get $694 million in lost productivity.

However, as economists, we can also say that the tradeoff is worth it.

My sources and more: For each economic topic there was a separate article. Wyoming facts were here and Oregon’s, here.and here. In addition Fortune spoke abut productivity and, if you want to read about solar power, Vox had an excellent article. But the most interesting was the Washington Post’s analysis of airfares and goats.

How College Athletes Are Really Paid