Producing more milk when they listen to Beethoven’s “Pastoral Symphony” than the Beetles’ “Back in the U.S.S.R.,” cows seem to enjoy mood (sorry) music.

Also, some deep sand, a nice warm temperature, the best alfalfa, better breeding and robotic milkers up their productivity.

A price spike in 2014 encouraged dairy farmers to increase the supply of milk. They had been enjoying heightened demand from a growing middle class in developing nations and European dairy production quotas helped also.

So supply is up: 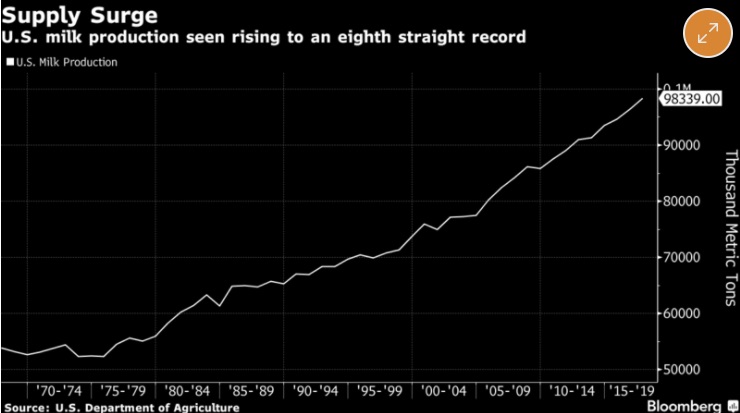 But then export demand contracted and Europe lifted the quotas. In addition, sanctions resulted in Russia banning Western cheese and a strong dollar made it all even worse.

More supply and less demand and you know what happens…prices plunge:

With some of their milk also, farmers are avoiding markets. Below you can see that 2016 was an all time high for dumping milk. Not any more. So far in 2017, 78 million gallons have been dumped:

When governments buy excess dairy products, they are trying to establish a price floor. Located above an equilibrium price that has gone down for dairy products, a floor artificially elevates price and diminishes the quantity supplied:

Still though, the power of the market has brought the price of dairy products down and created the incentive to produce less.

My sources and more: Always good for the facts and a graph, WSJ had the 2017 dairy facts and was the first of a series of milk articles that I discovered. Displaying the intersection of graphs and reality, NPR‘s Salt blog had some analysis. But I especially enjoyed the 2001 press release on the impact of cow moosic (i couldn’t resist). (Music might alleviate stress in chickens too.)

The Problem With Sand