The Accuracy of the Mashed Potato Index

Mashed Potatoes could be a good way to decide the direction of consumer spending.

Where are we going? To consumer spending indices.

A pound container of mashed potatoes will cost you $4 at Stew Leonard’s, a NY area supermarket chain. For a pound of potatoes though, you would spend just $1. Even with the milk and salt (and your time), making it yourself is considerably cheaper.

Stew Leonard Jr. says that mashed potato purchases can indicate that consumers are becoming more extravagant. When he saw that his mashed potato index recently soared by 31%, he wasn’t surprised that his catering and higher priced wine revenue also increased.

Was The MPI Right?

Looking back at 2015, the trend is up. Comparing 2014 to 2015, our average expenditures rose by 4.6%. Looking more closely, we would see that the percent increase in personal insurance and pension spending was up the most. Next came transportation, education and entertainment. As for food, the increase exceeded 10%.

Below you can see that the most affluent increased their spending the most: 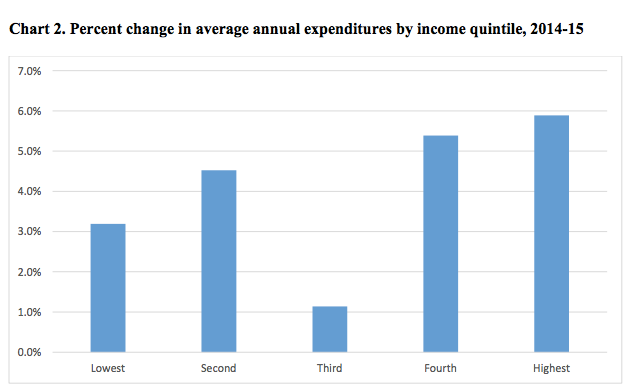 But many of us were spending more on food:

Where does the data come from?

The BLS spending numbers come from interviews and diaries. Scheduled every three months, the interviews depend on a participant’s memory. As a result, they are complemented with two weeks of daily diary entries that cover all spending.

Consumer spending can be about more than money. It can also relate to our confidence in the economy. Here though we hit an interesting anomaly. While Gallup and Pew say we do not like where the economy is going, the University of Michigan consumer sentiment index is at a 12 year high.

Some analysts say the divergence relates to our lens. With Gallup and Pew, the lens is political. The Michigan survey though focuses on participants’ current financial condition and their economic outlook.

The results are at a 12-year high:

The last Michigan survey was taken after the election. Some analysts believe the uptick forecasts a consumer spending increase…

My sources and more: Talking about the economy, the NY Times explained the mashed potato index. So, I checked spending trends at the BLS and the data that (frustratingly) were from the end of August. You might find it interesting (as did I) to conclude with fivethirtyeight for insight about the discrepancy between consumer sentiment and the political polls. Please note that this post was slightly edited after it was published.