Why Cheap Oil Can Be a Curse

The same curse has hit Russia, Venezuela and Libya.

Where are we going? To how oil wealth can be a problem.

The Price of Oil

Currently less than $50 a barrel, the price of oil has plunged from $100+ highs in less than a year.

With contraction in China and other developing economies still slumping from the recession, there is less oil demand.

World GDPs have been slipping:

Meanwhile, reflecting U.S. increases in supply and OPEC’s decision not to constrain output, global oil production has been up:

When demand goes down and supply increases, then price dips (at the intersection of the green curves): 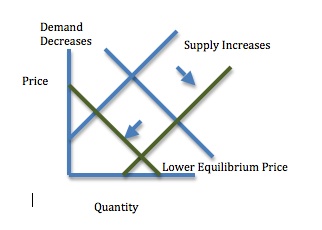 The Impact on Oil Producers

Because many of the governments of oil producing nations depend on oil revenue, a lower price affects national finance. This yardstick from WSJ lists the price of oil that major petro-states need to balance their budgets. With Brent Crude (global benchmark price) and WTI (U.S. benchmark) still close to $50 a barrel, only Kuwait is in the black.

The oil producing nations that could be most and least susceptible to the natural resource curse (aka Dutch Disease) are listed below. The graph displays how much each country’s economy depends on oil.