How a Performance Metric Can Lead to a Giant Nail

I have been told that the following cartoon’s caption says, “The month’s plan fulfilled.”

Published in a satirical magazine long before the Soviet Union disintegrated, the cartoon illustrates the perils of central planning. Because the plant manager had to meet a weight related production target, he could point with pride to a single massive nail.

Also reflecting weight as a key metric, some of the tiny lamps that were in Soviet university dormitories had lead filled bases. Elsewhere, when other metrics were used, similar problems developed. If factory output was a certain number of shirts, the shirts were manufactured but not necessarily the button holes.

Where are we going? Performance metrics shape our behavior.

Concerned about how we measure income inequality, economist Ed Yardeni questioned several statistics. Yes, real mean household income has stagnated (red line, below) but on the other hand, we have non-cash income from Medicare, Medicaid and other entitlement programs. If we count entitlement programs, then we have to look at personal income as our metric because those government benefits account for 17 percent of the total. Below, personal income per household is up. 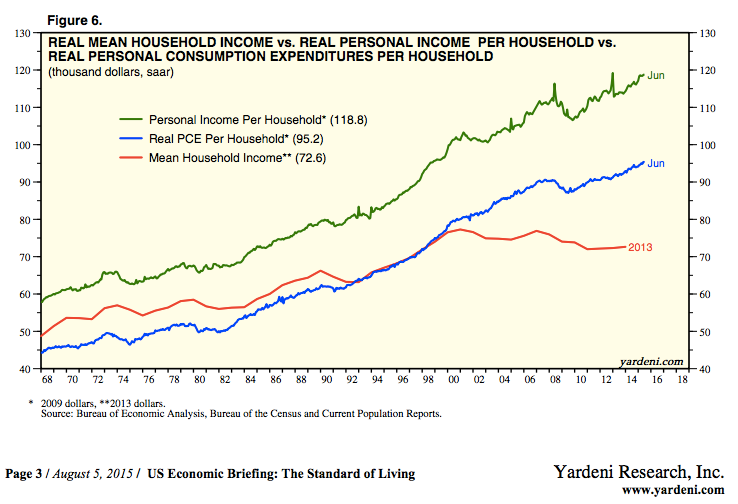 Yet another possibility takes us to the consumption side of income (rising blue line above) and we have not even gone into the impact of tax payments and the Earned Income Tax Credit.

You can see above how the line you look at shapes your income inequality story and your response.

Whether looking at incomes, hospitals, schools, police departments, baseball or beyond, performance standards create a set of incentives that shape how we behave.

They can remind us of that huge Soviet nail or Michael Lewis’s Moneyball and the Oakland A’s winning team.

What Ants Tell Us About the Wisdom of Crowds