The Impact of Japan’s Aging Population

A Japanese retailer said its escalators were now moving at two thirds their normal speed. The reason was Japan’s aging population.

With 244,000 fewer people in 2013, Japan is shrinking. Births are down and deaths are up as the age of Japan’s population climbs. By 2060, 40 percent of the Japanese population is projected to be older than 65. Adding to the growing age imbalance, Japan’s women can expect to live to 87 and men, 80. (qz.com says “Blame Sushi.”) 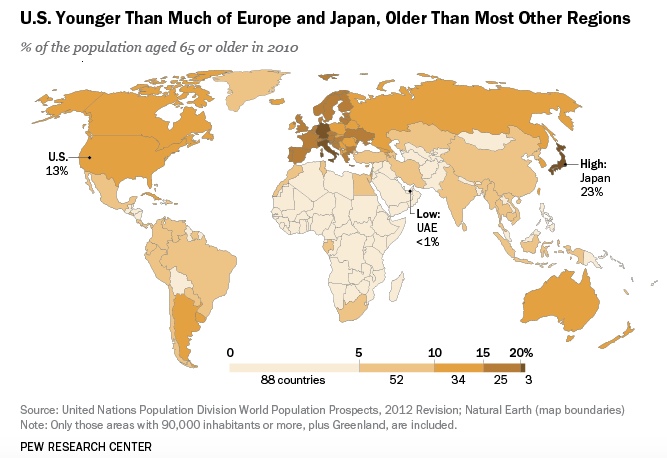 Where are we going? To the impact of an aging population.

Thinking of big and small changes, the soaring elderly population is affecting what the private sector produces. During a recent meeting in Japan, Apple’s Tim Cook and IBM’s Ginni Rometty described elderly targeted initiatives that combined iPads and Watson to provide devices and data for the elderly. Meanwhile the elderly have surpassed infants as Japan’s largest source of demand for diapers, food markets tell of extra nearby parking spaces for people with limited mobility and Bloomberg reported that older individuals hoping to iive in jail are committing crimes. I also read about bank tellers caring for customers with dementia.

Below, a Pew Survey indicates how much government might need to respond:

You can see where all of this anecdotal evidence is going. When populations age, economies shift.

Defined as the proportion of the population that needs support from the labor force because its constituency does not work, the dependency ratios of developed nations are skyrocketing as populations age. By 2050, they are expected to plateau at a whopping average of 50 percent “or one retiree for every two workers.”

And that takes us back to the demographic and product switch from babies to boomers:

What We Can Learn From Competitive Speed Eaters