What Your Walking Speed Tells Us

There appears to be a link among time, money and walking.

Wondering about people’s “time urgency” social psychologist Robert Levine looked at people in 31 countries, He observed how fast they walked 60 feet during rush hour on a clear day. Curious about how long it took a clerk to sell a stamp, he timed a post office transaction. Also, he checked to see if their bank clocks said the same time.

Summarizing, we can say that he looked at people’s walking pace, their work pace, and their time attitude. His results, shown in the table (below) from The Geography of Time, display each country’s time urgency rank. 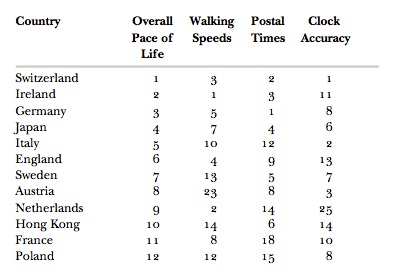 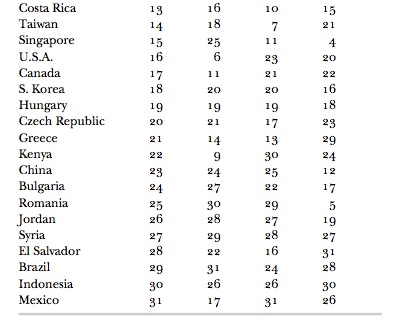 Levine hypothesized that a faster paced environment was the byproduct of a vital economy. Quoting anthropologist Allen Johnson, he said that as we industrialize, we move from “time surplus” to “time affluence” to “time famine”. Once we think we have a time shortage, as with any shortfall, the commodity becomes more valuable and we tolerate less waste. Speaking economically, the opportunity cost of delay—what we sacrifice—has become much more expensive.

Below “economic vitality,” Levine tells us that population size and temperature correlate with how we value time. Yes, we seem to walk faster when we live near more people and more slowly in cities with hot climates. Culture also counts. Communities that value individualism have a faster pace than those of us who are more communal.

The world has changed since Levine published his conclusions in 1997. The one constant though is that industrialization has externalities that relate to time.

The Difference Between a Cheese Steak and a Designer Dress